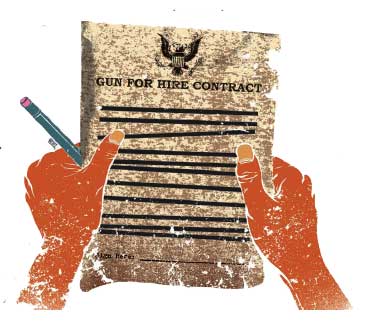 By Jeremy Scahill
While Blackwater and other firms reject the label “mercenary” firms, Blackwater executives have even turned the grey area in which they operate into a brand asset. Blackwater has been quietly marketing its services to foreign governments and corporations through an off-shore affiliate, Greystone Ltd., registered in Barbados.

In early 2005, Blackwater held an extravagant, VIP, invite-only Greystone “inauguration” at the swank Ritz-Carlton hotel in Washington, D.C. The guest list for the seven-hour event was a revealing mix of representatives from foreign embassies, weapons manufacturers, oil companies and the International Monetary Fund.

The diplomats were from countries like Uzbekistan, Yemen, the Philippines, Romania, Indonesia, Tunisia, Algeria, Hungary, Poland, Croatia, Kenya, Angola and Jordan. Several of those countries’ defense or military attachés attended.

Greystone’s promotional pamphlet told attendees, “It is more difficult than ever for your country to successfully protect its interests against diverse and complicated threats in today’s grey world where the solutions to your security concerns are no longer as simple as black and white.”

The pamphlet continued: “Greystone is an international security services company that offers your country or organization a complete solution to your most pressing security needs. We have the personnel, logistical support, equipment, and expertise to solve your most critical security problems.”

Greystone said its forces were prepared for “Ready Deployment in Support of National Security Objectives as well as Private Interests.” Among the “services” offered were Mobile Security Teams, which, among other functions, could be employed for personal security operations, surveillance, and countersurveillance. Greystone’s Proactive Engagement Teams could be hired “to meet emergent or existing security requirements for client needs overseas. Our teams are ready to conduct stabilization efforts, asset protection and recovery, and emergency personnel withdrawal.” It also offered a wide range of training services, including in “defensive and offensive small group operations.”

Greystone boasted that it “maintains and trains a workforce drawn from a diverse base of former special operations, defense, intelligence, and law enforcement professionals ready on a moment’s notice for global deployment.”

While Blackwater portrays itself as an all-American operation, even Greystone’s name is a play on the moral and legal ambiguity of its mission and modern warfare, one backed up by its recruitment efforts.

While Blackwater has become one of the most powerful and influential private actors in international conflict since the launch of the “war on terror,” it is by no means the biggest or most profitable of these companies. In some ways it is like a small, high-end boutique on a strip with several mammoth Wal-Marts. In fact, experts say there are now more private military companies operating internationally than there are member nations at the U.N., a symbolically harrowing statistic.
Illustration by Matt Cavanaugh