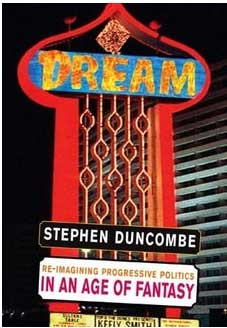 Dream tells us progressive should stop worrying and learn to love the spectacle. A core member of the Lower East Side Collective and Billionaires for Bush, author Stephen Duncombe analyzes Las Vegas, advertising, celebrity culture and Grand Theft Auto in an attempt to bring the lessons learned by the alter-globalization movement to the broader left. In place of appeals to reason — a la Al Gore — or harangues about the need to change our lifestyles, Duncombe proposes a carnivalesque politics, participatory and joyful, that appeals to Americans’ love of spectacle. Instead of tailoring packages of reforms or positions on issues to various constituencies, he proposes that progressives tell a story about what kind of people we are and where we want to go, providing a vision that we can embrace.

Duncombe is right in his critique of the left: it is alienating, timid and lacking in imagination. The main forms of participation it offers are marching in circles, giving money to canvassers or voting a certain way every two or four years. Outreach appeals are usually phrased in terms of guilt — what kind of asshole doesn’t have a minute for the environment? — and progressives lack a compelling narrative to draw in those unswayed by statements that they need to abandon their privileges.

Most people are bored at work, alienated by the lack of community where they live and unconvinced that the ultimate goal in life is the amassing of goods; progressives need to be able to offer them a real alternative, capable of capturing hearts and minds. And we need to engage with people as they actually are, with desires and dreams shaped by present-day capitalism, not as disembodied rational agents. As Shadow says in Mo Better Blues, “if you played the shit that they liked, then the people would come. Simple as that.”

But while Duncombe’s critique of the contemporary left is spot-on, his positive program falls short.

Politics is about power — radical politics is about seizing, smashing or building it — and the word ‘power’ shows up only in passing in Dream. Creating a politics of joy and imagination is crucial to building a movement capable of making real change, but can only go so far without the patient, sometimes frustrating and often tedious work of organizing for power. A politics of liberation can win over a majority of the population in this country over the long-term — but not if we’re afraid of some boredom along the way.

Unaccompanied by serious organizing, the act of dreaming Duncombe proposes for progressives leads in two directions. It can become a public relations strategy for existing political forces (the Democrats). Or it can turn into the temporary autonomous zone-style politics of Reclaim the Streets, of which Duncombe was an organizer, where organizing is not devoted to social change but to living our moments of liberation in the present tense — before the cops come. Duncombe is right that progressives have been out-dreamed by the right, but more importantly, they have been out-organized.

Duncombe says he wants to win. So do we all. I’m afraid, however, that he’s moving the goal posts to do so. As he says, let’s dream together. But let’s organize together too. Only then might it be possible to take our dreams for reality for more than a split second.