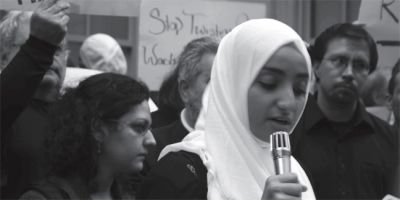 But in either of the above scenarios, we’d know it wasn’t about the T-shirts.

However, this basic fact has been obscured in the recent takedown of Debbie Almontaser, the veteran Brooklyn educator, Yemeni-American and hijab-wearing Muslim who was the founding principal of the Khalil Gibran International Academy (KGIA), an Arabic-English dual-language public secondary school in Brooklyn that is scheduled to open with the new school year.

Before Almontaster was ambushed by the New York Post, KGIA endured months of vitriolic attacks from right-wing websites like Stop the Madrassa, Militant Islam Monitor and Little Green Footballs.

Predictably, the Post, the New York Sun, Fox News and New York State Assembly Member Dov Hikind jumped eagerly into the fray. It’s the same cast of characters, Daniel Pipes among them, who trumped up false charges of anti-Semitism to try to shut down Arab scholars at Columbia University in 2004 and 2005.
According to a report in the Aug. 17 Jewish Week, Almontaser was misled by Post reporters in an interview for an article published on Aug. 6.

The Post submitted questions in advance before the NYC Department of Education (NYC DOE) would agree to let them interview Almontaser. All of the questions were about KGIA. At the end of the interview, the reporter asked offhandedly what “intifada” means.

Almontaser, who is after all an educator, looked up the word in the dictionary, and translated it accurately: “shaking off.” The reporter then told Almontaser that the Yemeni-American organization on whose board she sits shares office space with Arab Women Active in the Arts and Media (AWAAM) and that AWAAM had produced a T-shirt with the words “Intifada NYC.” Almontaser, to her credit, refused to throw the girls from AWAAM under a bus, instead referring to their nonviolent struggle to shake off oppression in their own lives.

The Post quoted her as saying “I understand it is developing a negative connotation due to the uprising in the Palestinian-Israeli areas. I don’t believe the intention is to have any of that kind of [violence] in New York City. I think it’s pretty much an opportunity for girls to express that they are part of New York City society … and shaking off oppression.”

On the same day the article appeared, Almontaser wrote in an e-mail to community supporters, “I was misrepresented and trapped by the reporter. Those were not my exact words, and the words I did use were taken out of context.” Later that day, she released a statement through the NYCDOE that read, “The word ‘intifada’ is completely inappropriate as a T-shirt slogan. I regret suggesting otherwise. By minimizing the word’s historical associations, I implied that I condone violence and threats of violence. That view is anathema to me.”
RANDI WEINGARTEN INTERVENES
On Aug. 7, the Post, without reference to Almontaser’s Aug. 6 statement of regret, ran an editorial asking, “What is she doing with the job in the first place?”
On Aug. 8, the Post published a letter from Randi Weingarten, president of my union, the United Federation of Teachers, in which she wrote, “I agree wholeheartedly with your editorial,” and, “While the city teachers’ union initially took an open-minded approach to this school, both parents and teachers have every right to be concerned about children attending a school run by someone who doesn’t instinctively denounce campaigns or ideas tied to violence.”

In her letter, Weingarten chose to ignore both Almontaser’s Aug. 6 statement and her proven record as a peacemaker. On Aug. 9 the Post quoted Weingarten saying, among other things, “maybe, ultimately, she should not be a principal.” On Aug. 10 Almontaser resigned, perhaps under pressure from Schools Chancellor Joel Klein and/or Mayor Bloomberg.

In her resignation letter, she wrote, “I have spent the past two decades of my life
building bridges among people of all faiths — particularly among Muslims and Jews.
Unfortunately, a small group of highly misguided individuals has launched a relentless attack on me because of my religion.”

Rabbi Michael Paley, scholar-in-residence at United Jewish Appeal-Federation of New York (Paley’s daughter is in charge of enrollment at KGIA), told Jewish Week that the campaign against Almontaser was a “high-tech lynching.”

If it was a lynching, my union did not string up the rope, but it was the UFT that kicked away the stool. I’m at a loss to explain why my union, which continues to support KGIA, piled on when the attacks on the school’s principal were at their shrillest. The union leadership insists that we were acting on our deep commitment to peace and nonviolence, but that’s a strange excuse for joining in a transparently racist and Islamophobic attack. I suspect that Weingarten, sensing which way the wind was blowing on Aug. 7 and 8, decided to play to the basest instincts of some of her rank and file.

The membership of the UFT is middle class and majority white, and many are Jewish. Not all middle-class white Jews lend credence to the Almontaser witch hunt — I’m middle-class, white, and Jewish myself — but Weingarten was counting on many of her members being solidly behind the Post on this issue. She may be right. But I don’t think that she counted on the firestorm of criticism she was to endure after Almontaser’s resignation. Those of us in the UFT and outside of it, who are outraged at the attacks on Almontaser, are not going to just let this matter drop. We will continue to expose the racist consequences of Weingarten’s statements, so that the next time the right-wing media hit squads go after an educator, she’ll think twice before lending them her voice.

Steve Quester is a Brooklyn-based UFT Chapter leader and veteran early childhood educator. For more, see Jews for Racial and Economic Justice (jfrej.org) and Arab Women Active in the Arts and Media (awaam.org).

RAISING THEIR VOICES : More than 200 supporters of the Khalil Gibran International Academy, including Sara Said Alkhulaidi, whose brother will be attending the school in the fall, gathered Aug. 21 outside the NYC Department of Education to protest the forced resignation of Debbie Almontaser, the former principal of the school. PHOTO: ULA KURAS