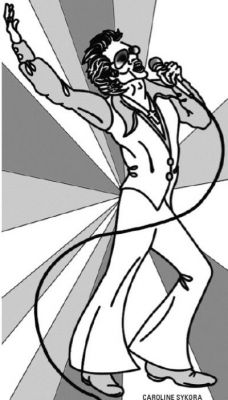 From stoops and tenements throughout New York, boom  boxes blast the sounds of merengue, reggaetón, bachata, cumbia and norteño. Latin America’s economic refugees have left an indelible mark on this city, but perhaps no contribution has been felt as vibrantly at street level as salsa music.

And perhaps no singer of salsa’s golden age in the 1970s and 1980s embodies the fortunes of the music like Hector Lavoe. Lavoe fronted the explosive Willie Colón band in the late sixties and early seventies as salsa music became an international phenomenon.

The plain-looking Puerto Ricoborn Lavoe, notorious for coming late to shows because of his heroin habit, was booted from the band but toured successfully for two decades after. Lavoe died broke and strung out from AIDS in 1993.  Fourteen years later, as other Latino musical genres gain popularity, Lavoe’s life gets another look.

Two film projects on Lavoe are slated for release and a rushed biography timed for the first of those film projects, El Cantante, also hit the bookstands. El Cantante stars Marc Anthony and his wife Jennifer Lopez, a producer of the film, costars as Lavoe’s wife Puchi.  Anthony nails the film’s musical numbers, including Lavoe’s most enduring song, “El Cantante” (“The Singer”). Unfortunately the audience never gets to hear Anthony belt out a full song and the narrative plot of the film sputters at critical junctures.

Lavoe was a junkie his entire adult life, and in the movie Puchi chastises him for drug use while  she cops next to him. But the intricacies of their relationship are never fully explored; the fact that Hector proposed to another woman carrying his child just months before proposing to Puchi, who was carrying his other child, is also ignored. Lavoe’s last five miserable years after his suicide attempt in Puerto Rico are also left out. Lavoe, abandoned by Puchi, spent that time shooting up and being carted on stage in bottomfeeding clubs where his wilted musical talents drew crowds but often not paychecks. Some sleazy club owners would cheat Lavoe on money and pay him in drugs.

The audience does get a lot o’Lopez, who undergoes gratuitous costume and hairstyle changes at the expense of Anthony’s performance.

J-Lo looks good and has her acting moment in an emotional fight scene after the accidental shooting death of the couple’s son. But climactic conversations throughout the movie do not add insight to Lavoe’s internal torture; neither do jittery pans of Lavoe and Puchi glancing at each other across smoky clubs.  El Cantante rarely brings Lavoe in focus as the improvisational singer whose lyrics connected to his Latino base. Passion and Pain, the Lavoe biography written by Marc Shapiro, offers more information than El Cantante, but is not the final word, as salsa singer La India is also working on a Lavoe film.

Those looking for a deeper Lavoe experience should check out his late 1960s and 70s recordings with the Willie Colón band (two solid albums are El Malo and Cosa Nuestra) and his solo albums. The Colón band explored topics such as poverty and street violence, playing out the gangster motif long before rap and reggaetón. Colón broke with Lavoe in the early 1970s and formed a partnership with Rubén Blades, and went on to produce the most politically left salsa of that decade.