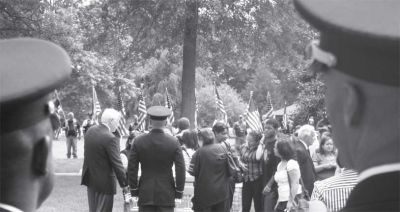 Emotions ran high Aug. 17 at Cpl. Juan Alcántara’s military funeral. The circumstances of his death were hard to accept.

Alcántara’s deployment in Iraq was due to end June 28, the day before his daughter Jaylani was born. But after President Bush announced the “surge” in January, his unit’s term in Iraq was extended by three months. His request for leave to see his newborn child was refused. Five weeks later, on Aug. 6, he was killed by a homemade bomb that exploded during a house search.

The funeral service at St. Elizabeth’s Church in Washington Heights was attended by 70 people, mostly family and friends from the Dominican community there. Alcántara was a happy and much loved man, by all accounts. Over the course of the day, it became increasingly difficult to square the rhetoric of “heroic sacrifice” with the human cost.

Army representatives awarded Alcántara a posthumous Purple Heart for the wounds that killed him. As the soldiers attempted to present the medal to his mother, Maria Alcántara, she lost consciousness, hitting the ground. As her family attempted to revive her, the soldiers stepped forward again to present the medal but she was delirious, head rolling from side to side, and unable to stand. In the end, his sister Fredelinda Peña rose to accept the Purple Heart.

The chosen burial site was the Long Island National Cemetary in Farmingdale. Small white headstones stretched out in all directions in perfectly straight lines. The mourners were grouped together under a gazebo sheltering them from the sun. They watched as soldiers worked their way through a series of rituals. Three volleys of shots rang out. Underneath a tree at 30 yards distance, a soldier played “Taps.” But every time the military presented a folded flag or medal to a family member, the crying intensified.

Finally, Alcántara’s mother marched to the car to fetch a Dominican flag — it was the most purposeful she had been all day. At least ten military officials attended. They stood firm in the face of the increasing distress of Alcántara’s family. Command Sgt. Ray Lane commented that it is difficult “for people to understand the mentality of soldiers.”

“You have to remember this is a volunteer army,” he said. “The time you serve is mission driven. When I was in Iraq I stayed. Soldiers are not likely to leave their comrades — even if they could.” And then as he walked away: “Of course we don’t like it when we have to stay longer, but we do it.”

As the women handed out flowers to place on the coffin, a young man broke into the soldiers’ ranks and walked between those standing stiffly alongside the coffin, landing a kiss on the metal casket with his hand. As he walked away from the grave he said, “All I’ve got to say is Fuck Bush,” in the direction of the guards. A Dominican woman stood nearby murmuring in agreement. The young man remained at a distance, struggling to keep his composure. He and Alcántara were cousins who grew up like brothers under the same roof from the time Alcántara moved to the United States from the Dominican Republic following his father’s death.

“He died for nothing,” he said. “For oil. For nothing.”
He shot an exasperated look in the direction of the row of some 20 flag-holding Patriot Guard Riders, a group of motocyclists who tour the country attending funerals to “stand for those who stood for us.” “He was supposed to be back in June,” said his cousin, who declined to give his name. “They could at least have let him see his daughter. He was so excited about his little girl. He said ‘Okay, I’ll stay but just let me go back for one or two days to see her’ but they didn’t let him.”

Alcántara’s cousin was bitter about the Army’s recruitment methods, feeling that Alcántara was misled and tricked into joining. “Juan was working in a snooker hall. He was bored one day and he called Army recruitment,” he said. “After that they wouldn’t let him alone. They put him under so much pressure, sending him letters, emailing, calling him. They told him about all these benefits. They told him he would get a good job afterwards. And they told him he wouldn’t go to Iraq. Everybody told him not to join.”

As the burial drew to a close, white flowers were laid on the coffin and the family clustered around the casket to say goodbye. For the first time, Alcántara’s daughter Jaylani began to cry. Her wails were joined by her those of her mother, Sayonara Lopez, Juan’s partner of five years. She embraced the metal coffin, alongside Juan’s mother, and her cries filled the graveyard. Eventually, Lopez was gently lifted off the coffin and led away.