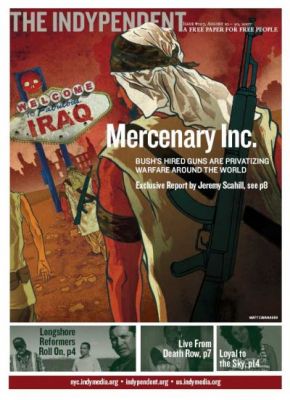 The reporter mischaracterizes the organization for which Director of National intelligence Mike McConnell served as chairman — the Intelligence and National Security Alliance (INSA ) — which by its charter and by law does not lobby. Instead, it includes current government officials, professors, academics and private sector intelligence practitioners in a public policy forum. INSA funds a teaching position at Georgetown University to teach intelligence policy and partners with the University of Maryland.  INSA also had a strong relationship with the former DNI John Negroponte who asked INSA to host some conferences in partnership with the ODNI.  This topic is important enough to deserve more accurate reporting.
—Jason Kello, INSA spokesperson

Now, what does the INSA actually do? According to a fawning Washington Post article:
“The group is working to introduce a growing network of private contractors, large and small, to government intelligence agencies. Like much of the rest of the government, U.S. intelligence agencies are increasingly outsourcing what they need in the name of expediency: cutting-edge technology, goods and services, such as gee-whiz satellites, particularly to protect against another terrorist attack.

“INSA doesn’t just make introductions for such members; it conducts research and analysis, and sponsors workshops, symposiums and councils on such matters as domestic intelligence, security, counterintelligence and innovative technologies.

Since September, it has funded a Georgetown University professorship in the practice of intelligence, held by retired Air Force Lt. Gen.  James R. Clapper Jr., the former director of the National Geospatial-Intelligence Agency who has been nominated as undersecretary of defense for intelligence.

“But it’s hard for INSA to give much of a definitive shape to this undefined nexus between intelligence contractors and the government agencies they work for, a cast of characters located mostly in greater Washington.” Obviously, the INSA , despite its “non-lobbyist status,” has an agenda and is pushing the very kind of privatization Jeremy Scahill documents in this article.

Now, granted, this isn’t “lobbying” in the technical sense. But only a naive fool wouldn’t understand that this kind of work is lobbying in a much more important way. The INSA appears to be setting the intellectual agenda for pushing forward the privatization of U.S. intelligence — which is worse than lobbying. Perhaps these semantic distinctions matter in the fetid, incestuous swamp that is Washington, D.C., but most normal people, and honest  journalists, understand enough to not be blinded by Clintonesque phrase parsing.

Is there no one in the U.S. House or Senate willing to raise serious questions about the use of mercenaries as privatized troops, unaccountable to anyone no matter what they may do? These mercenaries actually outnumber our troops and can earn from $650 to $1,000 a day if they are well-trained soldiers.

But the privatized corporate contractors whose armies of men run in the hundreds of thousands provide a wide variety of services — guarding, training, etc. — earning the owners hundreds of millions of dollars.
We are giving away our national security by creating a privatized quasi-military force that cannot only compete with the Army, but also can influence the government to support highly profitable ventures into invasions, occupations and wars.
—Sidney Moss

Responses to “Hector Lavoe, A No Show, Again: A Review of the Film El Cantante,” August 10
Salsa is mostly Cuban music.  Hector Lavoe sang Willie Colon’s songs that became classics. Lavoe was like other great singers/musicians, like Elvis Presley, who died of an overdose; like Janis, Morrison and Hendrix. The drug culture was part of the music scene.

The author of the article, Bennett Baumer, reminds me of the movie Almost Famous, but he never traveled with the band and he made up the story without doing his homework.  Very independent and very irresponsible, no intellectual honesty there. Sorry Baumer! What a bummer! —Ramon Muniz

Mr. Bennett’s rhetoric comes across as regionalistic propaganda and smacks of exclusionism. He should have been better informed.  Before he refers to “salsa” as “a blend of Puerto Rican folk styles (plena y bomba) and modern jazz, with pulsating trombones leading quickly changing musical arrangements as Lavoe’s wide (though nasal) range fronts the band,” he should seek out and interview the real pioneers and innovators, specifically those who came before Hector and Willie Colon’s generation and who are still alive. Before signing his name to statements like these he should read about the very early Cuban forms and their extensive history, as well as their sphere of influence, and listen to as many manifestations of “salsa” as he can, especially those which pre-date the 1970s “salsa boom.” And then he should go and do the same with Puerto Rican music.
—Chico Alvarez, WBAI radio host of New World Gallery

[I] did get to see Hector Lavoe perform live three times in the late 1970s and early 1980s here in New York. I even have a picture with him from 1979. When I asked him to please step down from the stage to take a picture with me, he extended his hand and brought me on stage with him. With all of his problems he was one truly humble individual, blessed with tons of talent. By the way, the song “Hacha y Machete” is about him and Willie (at the beginning when they were paired up by Pacheco, they were looked at as a kiddie band, and not taken seriously). The combination of Hector’s smooth voice and Willie’s musical ideas was lethal, progressive and changed the face of Afro-Cuban music to this day.
—Marcus