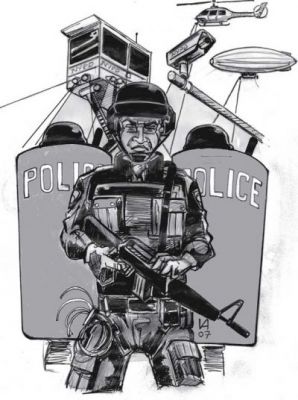 After the September 11 attacks on U.S. symbols of power, the NYPD took public fear of more domestic attacks as a mandate to morph into a technology-driven force tasked with fighting global terrorism. The display shows how so-called Hercules officers can randomly appear around the city wearing body armor and brandishing heavy weapons in order to scare off potential terrorists.

Visitors to the exhibit get the lowdown on new crime fighting strategies from walls of images and video screens accompanied by commentary, including this one from former National Coordinator for Security and Counterterrorism, Richard Clarke: “It is possible to deter Jihadist terrorists by the presence of a show of force or by the nature of a system that is unpredictable, so they know there is a security system in effect, but they don’t know when and where it will be present.”

This unpredictable system receives direction in part from a restructured NYPD Intelligence Division that works with the Federal government, but no longer relies on it for national security. The division includes cyber-sleuths who monitor Arabic chat rooms to identify potential threats, and liaisons stationed in 10 cities outside the United States.

Two separate sections promote increasing attention to the potential for “homegrown terrorists” and the department’s new Immigration Outreach Unit. These topics merged last month when NYPD released a study called “Radicalization in the West: The Homegrown Threat,” which argued that recent plots against the West were the work of “unremarkable” Muslim men aged between 15-35 who are “particularly vulnerable” to radicalization. One wonders if officers shown in the display conducting community meetings at crowded mosques were actually gathering data for this study.

Police tend to support a police state, and this exhibit lacks any reference to the privacy concerns that come with anticipating terrorism before it happens.

No quotes from critics point out that even the most vigilant police dog couldn’t have sniffed out the planes that flew into the World Trade Center. You also won’t see accounts from average citizens of the increasing difficulty of filing crime reports.

Instead, the New York Police Museum’s updated history display is a convenient stop for tourists to visit when they realize they can no longer tour the Stock Exchange (too easy to collect information for future attacks), while reinforcing locals’ need to believe they are safer even as Homeland Security funds disbursed to the city decrease each year.
—Renee Feltz