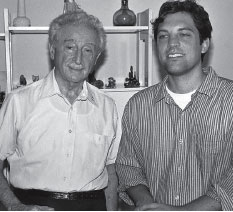 By Bennett Baumer
Mosess “Moe” Fishman was a great man. A truck driver and laundryman who had to drop out of school during the Depression, he arrived in Spain in April 1937 with the Abraham Lincoln Brigade, a group of American volunteers who fought on behalf of that country’s progressive, democratically-elected government during the Spanish Civil War. More than 2,500 American communists and fellow travelers joined the brigade to fight for freedom and democracy against the fascist coalition — the Catholic Church, monarchy and sections of the military led by Gen. Francisco Franco — that overthrew the government.

I had the opportunity to interview Fishman at his Penn South apartment weeks prior to the 2004 Republican National Convention (RNC). He recounted being injured in battle, fighting Hitler and Franco and keeping the Veterans of the Abraham Lincoln Brigade (VALB) going during the dark days of McCarthyism. The U.S. government considered VALB a subversive organization, and while many in Fishman’s generation named names, he and many other Lincoln Brigade vets didn’t capitulate to McCarthy. In 1970, the U.S. Supreme Court sided with Fishman and VALB and declared that government repression of the group was unconstitutional. Fishman also advocated for Spanish Civil War POWs, many of whom died in Franco’s concentration camps. I ran into Fishman again marching in sweltering heat against Bush at the RNC and at various exhibitions commemorating the anti-fascist struggle in Spain. Fishman and the VALB were labeled “premature anti-fascists” when they denounced Hitler and fascism in the 1930s — a time when many Americans like Henry Ford openly praised Nazism.

What made Fishman a great man was that he didn’t stop the good fight in Spain, even though that war ended in disaster for the brigade (which lost more than 750 men) and the people of Spain. Moe fought the good fight all his life and was no stranger to a peace rally, union drive or solidarity movement.

Fishman, 92, died on Aug. 6, 2007, after a battle with pancreatic cancer.
PRESENT: Moe Fishman at his apartment with Indypendent reporter Bennett Baumer in 2004. photo : Amelia Krales