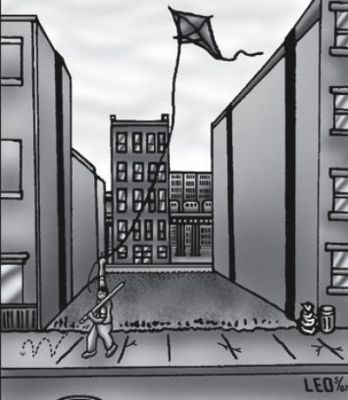 Through the Looking Glass east harlem under the microscope
The Tenants of East Harlem
By Russell Leigh Sharman
University of California Press, 2006

Between East 96th and East 125th Streets in Manhattan lies the neighborhood known as East Harlem, crossed by several thoroughfares and populated by Blacks and Latinos.  It is an area long abandoned by the city. In the late 1960s, the Young Lords formed barricades here with bags of garbage to protest the lack of city services.

The neighborhood’s dilapidated tenements were taken down and replaced with large public housing developments, in what was thought a good idea at the time, but which has had a devastating effect on the neighborhood.  East Harlem now has one of the largest concentrations of public housing in New York City.

It is the residents of this neighborhood that Russell Leigh Sharman gives voice to in The Tenants of East Harlem. The book is broken down into several life stories from a variety of backgrounds that illustrate the East Harlem experience.

From the perspective of the author, who is white and a newcomer to the neighborhood, we see how different groups live with each other, how new immigrants are challenging the claims of the old and how that cycle is threatened by gentrification.

As Lucille, who runs a tenant patrol in her city housing building, observed, “That’s a big problem right now with Harlem, period. You got housing developments around coops and condominiums, and they’re going to try and upgrade their situations; and some can afford it and some people can’t.”

Sharman relates the history of immigration that started with the Italians, followed by Puerto Ricans and Mexicans.

There’s Pete, an elderly Italian-American who remembers the neighborhood along Pleasant Avenue before the housing projects were built. “There was a lot of tension between Italians and PRs [Puerto Ricans],” he recalls. And by the 1940s Puerto Ricans were the new Italians, as Piri Thomas wrote in his autobiography, Down These Mean Streets, nearly 40 years ago.

Long-time resident José left for a while but returned to raise his family.  “East Harlem started on 106th Street,” he said of the cultural corridor of Puerto Rican Harlem.  And then there are newcomers like Maria, an undocumented Mexican, who works as a hairdresser.
“116th, from Third, Second, First Avenues, is like a Mexican community,” she said of her new neighborhood.  And there’s the author’s landlord — who works as a janitor in a Times Square hotel but owns a house in East Harlem.

All these stories make up East Harlem, with its multicolored mosaics, 99-cent stores along Third Avenue and bodegas on every block.  Ultimately, this book is as much about the author and his adventure in Spanish Harlem as the people he interviews. The author got in-depth interviews into the lives of several of his neighborhood residents. But this book reads as a how-to for an academic to move into an ethnic neighborhood and study its inhabitants.