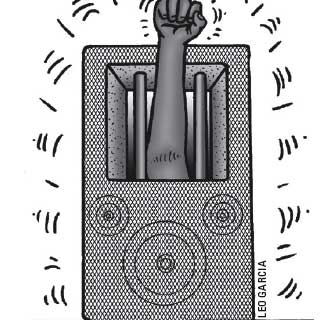 Cruel and Unusual Punishment: A Hip-Hop Compilation to Abolish the Death Penalty
Welfare Poets, 2007
New York City’s Welfare Poets declared “lethal injection ain’t no different than a noose” on a track from Cruel and Unusual Punishment, performed recently at St. Mary’s Episcopal Church in Harlem. The revolutionary and sometimes nationalistic lyrics on this hip-hop CD compilation have the same message as the refrain of “Lift Every Voice and Sing,” an anthem found in the church’s Hymnal: “Let us march on till victory is won.”

Ray “Rayzer” Ramirez of the Welfare Poets worked with Sheild Magazine at Hunter College to collect the CD’s 19 tracks, all donated by emcees from the United States and Africa. “Even though hip-hop has been coopted by mainstream media, it is still at its root a means for change,” he says.

The project plays like a soundtrack for the abolition movement by offering educational and inspiring lyrics amid catchy loops that bridge a gap between religious and human rights groups and the hip-hop generation who, Ramirez expects, will “disproportionately be faced with death sentences.” CD sales will support death row prisoners and the groups fighting to save their lives.

On the opening track, Abodum, of the Last Poets, is asked if he supports the death penalty.  His “hell no” answer targets any listener still on the fence. During the chorus of “No Problem,” Trigga N.A.M. rides a catchy beat and urges “clap your hands like this, pump up your fist.”

Near the end of the CD, Warclub raps “they can’t wait to get you behind the double gate” and urges the listener to “bust the fuck up out  of the metal.”

Many tracks go beyond death  row to examine racial and class oppression as part of the entire prison industrial complex.

In “The New Plantation” Blitz raps that overseers “traded their whips for cuffs and batons,” and in “Mind is Free” Hasan Salaam clarifies, “in case you didn’t know, the ghetto is death row.” During “Lock Us All Up,” the Welfare Poets ask “How can there be capital punishment without punishing the capital?” Cruel and Unusual follows other hip-hop compilations in support of death row political prisoner Mumia Abu Jamal. This project addresses similar issues, but sounds more independently produced with its simple sampled loops and lesserknown, yet talented artists. Many of them have personal ties to capital punishment — like Jav’lin, who expresses sincere anguish when she sings “Walk with Me,” promising “I”ll be there when you need me” to her husband, Kenneth Foster, who faces an Aug. 30 execution date. (Read an interview with Foster on p. 7).

Ramirez hopes those who hear the CD’s call to action will also be there for death row prisoners.

When he shared Foster’s poetry during the Welfare Poets’ performance at St. Mary’s, he asked, “Do you understand my hell?” This project could sustain a militant abolition movement by those who get its message and choose to lift their voice and march “till victory is won.”
—