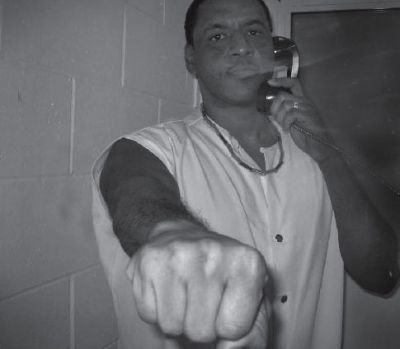 By Renee Feltz
POLUNSKI UNIT, TEXAS—On Aug. 30, Texas plans to execute Kenneth Foster, Jr. for his role in the 1996 murder of Michael La Hood, Jr.. The state admits Foster’s already-executed co-defendant, Mauricio Brown, was the actual killer. But it secured his death sentence based on a conspiracy charge related to the Law of Parties (LOP)—a statute in place nationwide but only applied to capital punishment cases in the state that has sent more than 400 men to death since 1972. On Aug. 7, a Texas court denied Foster’s final appeal. In a June 20 interview, Foster explained the law and how it relates to his case, and his activism with fellow prisoners who refuse to go quietly.

RF: You’ve stated from the very beginning that you did not murder Michael La Hood. So how were you sentenced to death?
KF: Well, it all goes down to a little statute called the Law of Parties under the Texas penal code. It says a person is criminally responsible for an offense committed by the conduct of another if “acting with intent to promote or assist the commission of the offense he solicits, encourages, directs, aids or attempts to aid the other persons to commit the offense” or “If, in the attempt to carry out a conspiracy to commit one felony, another felony is committed by one of the conspirators, all conspirators are guilty of the felony actually committed, though having no intent to commit it, if the offense was committed in furtherance of the unlawful purpose and was one that should have been anticipated as a result of the carrying out of the conspiracy.” Texas says I should have anticipated what a co-defendant of mine could have done during a robbery I had no part in planning or carrying out.
RF: Talk about how the LOP applies to your actions on the night of Aug. 15, 1996. Was there a conspiracy? Was there anticipation?
KF: No! When this situation happened at the La Hood residence, they tried to show this was a continuation of robberies we did earlier in the night, even though all the evidence was showing there was no plan, no conspiracy. Mauricio Brown — the person who did the shooting — said nobody encouraged him to do anything, but they disregarded that evidence. We were driving home when we were flagged down by a woman.

When Brown — who was somewhat of a Romeo — got out and approached her, he was about 80 feet from the car. The woman’s boyfriend, Michael La Hood, came up, and Brown thought he heard him cock his gun, and he shot him. I tried to drive away, but the other two people in the car convinced me to wait for him. He came back and we were all asking what was going on. If there was a robbery planned, one of the three of us in the car would have accompanied him.

The prosecution focused on capital murder convictions for political reasons. La Hood’s father was a prominent attorney in San Antonio who was in the courtroom before and during the trial in which I was unfairly tried at the same time as Brown.
RF: Talk about your activism on Texas Death Row for the past decade.
KF: I co-founded the coalition called DRIVE — Death Row Intercommunalist Vanguard Engagement — with fellow prisoners, Gabriel Gonzales and Rob Will. We decided people were in a rut, and in my concept the only difference between a rut and the grave is the size. We wanted to bring attention to the conditions — 22 hours a day in our cell, bad sanitation, poor food. We also wanted to encourage individuals to stop colluding to their own murder. How can we expect people in society to not participate when we participate? The joke is on us when you eat this death feast [final meal]. That stuff isn’t even going to digest. DRIVE is dedicated to non-violent activity — it’s resistant, but not violent.
RF: What was it like getting assigned a death date?
KF: I’ve always been prepared for it. There are about 504 cells back here and I look at all of them as death cages. Being complacent is a disease back here and the DRIVE comrades are a minority. We have to stay focused on what we’re doing, and we have to focus on the Law of Parties — these people are about to kill somebody they know never killed anybody.

Foster Campaign Is Up Close and Personal

Her father’s execution date just over a month away, Kenneth Foster’s pre-teen daughter Nydesha led hundreds on a march through the Texas capital chanting “Death Row? Hell No!” with her fist in the air. Days later her voice carried across country to Harlem as she spoke via cell phone during a July 26 anti-death penalty forum in St. Mary’s Episcopal Church.

Nydesha is among the family, friends and politicized artists in the hip-hop community who have broadened the national fight for Kenneth Foster’s life beyond the usual suspects (see review of Cruel & Unusual Punishment CD, p. 12). Their personal motivation adds nuance to the often morally righteous, but stale abolition movement during a time of increasing public awareness about the flaws of capital punishment. The Campaign to End the Death Penalty, with chapters in New York and Texas, put personal voices first when they took on Foster’s case.

Foster realizes his conviction has a personal impact for the victim’s family as well, saying “I am sorry for what happened to their son, but at the same time, I didn’t kill him.”
La Hood’s former best friend, Sean-Paul Kelley, recently used his platform as a radio host and progressive blogger to speak out against Foster’s execution, arguing “the execution of a young man who didn’t even kill Mike? That’s not justice. It’s senseless vengeance, a barbarism cloaked in the black robes of justice.”