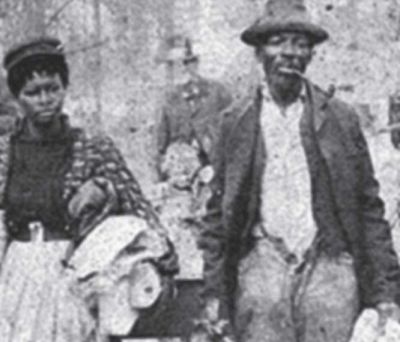 Banished
Directed by Marco Williams
Center for Investigative Reporting, 2007
Very few African-Americans live in the hills of north Georgia. Part of this is the result of historical demographics the land at the southern end of the Appalachian Mountains wasn’t prime plantation country, so it was settled mainly by whites too poor to afford slaves. And part of it is the legacy of racism.  In 1912, after a Black teenager was accused of raping a white girl and lynched, almost all of the approximately 1,100 Black residents of Forsyth County were driven out in one day. The ones reluctant to leave by midnight had their houses burned.

That forced exodus was the worst of a number of little-known incidents of local ethnic cleansing in the early 20th century, most taking place in areas of the Southern and border states with relatively small Black populations.  Their aftermath is the subject of Marco Williams’ film Banished.  Following the work of reporter Elliot Jaspin, Williams journeys to Forsyth County; Pierce City, Mo., and the Ozark Mountain town of Harrison, Ark., to talk to descendants of the expelled, tracking their efforts to win emotional and financial compensation and filming current white residents’ reactions.

Out of necessity, it’s a low-key film, consisting mainly of interviews and interactions. In Forsyth County, the descendants of Morgan Strickland try to trace the fate of his land, seized as “abandoned” after he was forced out, while in Missouri, two St. Louis brothers try to get their great-grandfather’s body transferred from an unmarked grave in Pierce City to their family plot. The film raises the issue of reparations. What could be proper compensation for your ancestors losing their homes and community to racist terrorism?  And what do today’s whites owe for something that happened 100 years ago?

The white officials, reluctant to help, offer superficial sympathy, but turn weasely when faced with the concept of actually giving up anything. In Pierce City, they bridle at paying for the exhumatolerance tion, and in Forsyth County, now a suburb of Atlanta, the Strickland family land is occupied by brick McMansions that sell for up to $600,000. Ironically, Harrison, the community where local whites seemed to be the most sincere about making amends — led by a charismatic preacher, they created a scholarship fund for Black students — is also the home of a faction of the Ku Klux Klan.  That faction’s leader, who once published a book entitled The Negro: A Beast, is now more media-savvy, speaking mainly about “preserving our community.” But one white retiree, clipping coupons at his kitchen table, is less circumspect; he tells Williams — a dreadlocked Black man — that he settled in Harrison because there were “no Blacks.”

This history is not merely a relic of the ancient past. Banished includes footage from Forsyth County in 1987, when 1960s civil rights activist Hosea Williams joined a group of local whites holding a “brotherhood march,” and the Klan attacked them with rocks. And though the film doesn’t go into this, racial cleansing is common today — in the more subtle, ethno-economic form, that of urban gentrification, such as the Brooklyn landlord who bought five buildings on a Bushwick block and immediately purged all the Puerto Rican tenants, to make the neighborhood more “desirable.”