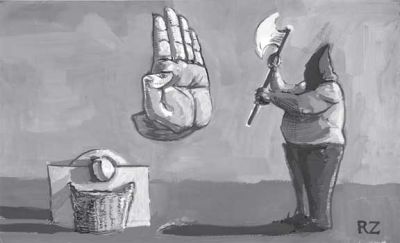 By Liliana Segura
On Aug. 30, deep in what death penalty abolitionists call “the belly of the beast,” the seven members of the Texas Board of Pardons and Paroles decided whether a man should live or die.  The man was Kenneth Foster Jr., a 30-year-old death row prisoner who had become something of a celebrity in recent weeks. Foster faced execution that night for a crime that everyone — even prosecutors — admitted he did not commit.

The Board knew the case well. On the night of Aug. 15, 1996, Foster was driving the car used in a series of robberies committed by Mauriceo Brown — robberies that culminated with the shooting death of Michael LaHood, Jr. Prosecutors acknowledged that Foster, who was tried for murder alongside Brown, stayed in the car, 80 feet away, when the killing occurred. Under Texas’s Law of Parties, they argued that Foster, as an accomplice in the robberies, “should have anticipated” that a murder would take place and therefore deserved to die.  Many found the case appalling. But Texas capital cases often are. It’s a system that executes people with chilling regularity — and the people who run it rarely flinch, even in the face of a judicial miscarriage.  But this case was different. Petitions and letters against Foster’s execution had bombarded the Board for weeks. Most recently, President Jimmy Carter and Archbishop Desmond Tutu had shown their support.

Word came from Rome that the Coliseum would be illuminated to show opposition to his execution.

Just days before, Governor Rick Perry had brushed off an appeal from the European Union, saying “Texans are doing just fine governing Texas” and signed off on Texas’ 400th execution since it resumed applying the death penalty in 1982. Nonetheless, the Board had postponed its decision on Foster, following a meeting with his father, his grandfather and his attorney, Keith Hampton.

Rather than portray Foster as a saint, his father described the circumstances of his childhood — marked by drugs and poverty — and acknowledged that his son owed a debt for his role. “The strategy,” explained Hampton, “was to do the opposite of what they usually do in clemency cases.” “Now, I don’t think that carried the day,” he added. While it’s impossible to know for sure what moved the Board to vote the way it did, “Everyone agrees that the Board treated Kenneth’s case differently,” said Bryan McCann, a member of the Campaign to End the Death Penalty.

“I think the board was ultimately swayed by the visibility … and the near consensus that something was very wrong with Kenneth’s sentence.”

The two went hand in hand. It was the movement for Kenneth Foster that thrust the Law of Parties into the spotlight in the first place, prompting people to ask how a man could be executed for a murder he didn’t commit — especially when the actual murderer had been executed a year before. In meetings and conference calls, the Austin-based Free Kenneth Foster Coalition, the national Campaign to End the Death Penalty, the political hip-hop group the Welfare Poets and a prisoner’s movement co-founded by Foster — Death Row Inner-Communalist Vanguard Engagement (D.R.I.V.E.) — set out to fight for Kenneth Foster.

They took the message to the streets and to the media, and people began joining the fight, signing petitions, calling the governor’s office and picketing. Foster’s 11-year-old daughter Nydesha spoke out against Texas’ plan to kill her dad, alongside exonerated death row prisoners from across the country. As Foster’s execution date approached, most major Texas papers ran editorials calling for clemency.

On Aug. 21, word came from Foster and another prisoner, John Joe Amador, that they would nonviolently resist their executions. “We will not walk to our executions and we will not eat last meals,” they wrote. “We will not give this process a humane face.”
INSIDE THE WALLS UNIT

The night before he was scheduled to die, Foster was transferred to the Walls Unit in Huntsville, the site of the Texas death chamber, though the Board had still made no recommendation to Gov. Perry. As promised, Foster refused to walk, at one point laying down in protest. Security was intense. “I was loaded into the van,” Foster would later say in a message to supporters.  “… There were a lot of officers armed to the teeth with handguns, shotguns, assault rifles … There was enough arsenal to wage a small war … Social discontent [was] being exuded, and the system felt it.”

Foster woke up on Aug. 30 unsure whether he would live or die. He saw his friends, family and, with his execution hours away, his wife. Then his father arrived. “He just threw his fist in the air and screamed: ‘Six to one!’” The Board had recommended clemency. It was then, said Foster, “I knew victory was mine.” However, Perry had reversed such recommendations before.

Nonetheless, an hour later, he released the statement confirming he was commuting the sentence. Outside, frenzied calls to action became jubilant phone calls.  Legally, Foster is still under a capital murder conviction — although his life sentence carries the possibility of parole. Already, he has been transferred to the general prison population. For the first time in 10 years, he will hug his daughter.

“I hope that my fight has given some new hope to the struggle showing that the impossible can be done,” Foster continued in his message to supporters. “And if it ever happens once it can happen again — and it must! History was made on Aug. 30, 2007, and it’s this day that I pray hope was resurrected amongst our fighters in an otherwise grim-minded people where over 400 murders have brutalized us. Today is a new day and we’re taking Texas by the horns — and we’re not letting go.”

Liliana Segura is a member of the New York chapter of the Campaign to End the Death Penalty (nodeathpenalty.org).