A Link to the full photo spread in the Indy 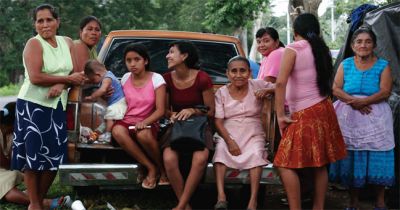 The few have dominated the many in Guatemala since Spanish conquistadors arrived in 1524. As of 2000, 1.5 percent of the population controls 62.5 percent of the land, while most of the Central American nation’s 13 million people live in urban slums, on marginal lands or have ventured north at great risk to try their luck as immigrants.

Guatemala’s status quo has been held in place for decades by a system of inequality that allows large landholders and their military and paramilitary allies to terrorize the civilian population. More than 100,000 Guatemalans were killed during a 36-year civil war that ended in 1996, and local land battles continue to this day. Against this backdrop, photojournalist James Rodriguez has traveled the length of the country during the past year chronicling the struggles of ordinary people fighting for their rights.

“We are not squatters, we are natives of Guatemala. The company is the one squatting! Our parents were not evicted … they were massacred for seeking a small piece of land.” — Fredy, a local Maya Q’eqchi’ community leader. “If a rich person had been kidnapped, a poor person would already be in jail … It is as if justice does not apply to us poor.” — Bety Reyes Toledo, daughter of the vanished Hector Reyes.
NUEVA LINDA, ALONG THE SIDE OF THE ROAD

Hector Reyes was a peasant leader who belonged to the Landless Maya Workers Union (STMST) and worked in the Nueva Linda landholding, near the coastal town of Champerico. He disappeared Sept. 5, 2003. Peasants from 22 nearby communities occupied the landholding in October 2003 to demand explanation from the authorities. On Aug. 31, 2004, Guatemalan security forces carried out a violent eviction that left nine peasants and three police dead. Afterwards, Reyes’ family settled in the few meters separating the Nueva Linda landholding from the highway. Four years after Hector Reyes’ disappearance, the Nueva Linda Movement forJustice continues its struggle along the side of the road. On Sept. 1, the community held a vigil of support as trucks sped by (above), screening a documentary on Reyes’ disappearance. Reyes’ daughter, Bety Reyes Toledo (pictured at left) says, “If a rich person [had been] kidnapped, a poor person would already be in jail. But since it was a rich person who kidnapped my father, nothing has been clarified … It is as if justice does not apply to us poor.” 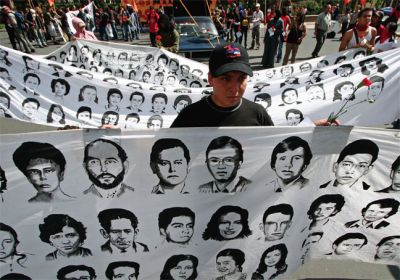 On June 30, the children of victims of government-led counterinsurgency campaigns during the 1960-1996 civil war rallied in Guatemala City and tried to halt the annual parade commemorating Military Day. 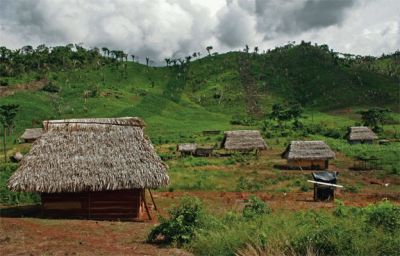 WE ARE NOT SQUATTERS

In July, a delegation of Mexican, U.S. and Canadian activists visited some of the communities evicted by the Guatemalan Nickel Company (CGN) in November 2006 and January 2007. During one visit, a resident of the Community of La Paz, who identified himself as Don Arturo, declared: We are here because we are hungry. We must eat and [we] have children to feed. Large companies have taken possession of huge parcels of land within the Guatemalan territory while we, the indigenous peoples, have been marginalized. What we ask for is very little: a place to live, a place to grow our crops to eat. Because of the evictions we have had to endure rain, endure hunger, endure cold, endure winds. But here we are. We are determined to continue the struggle for this piece of land because our children depend on us.
During the delegation’s visit, a new order submitted by CGN to evict the Maya Q’eqchi’ communities of the region was postponed indefinitely. Nevertheless, many fear eviction is imminent.

All photographs by James Rodríguez, MiMundo.org
Visit mimundo.org and mimundojamesrodriguez.
blogspot.com for links, information, updates and many more photographs.