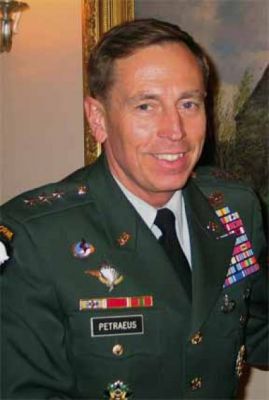 Gen. David H. Petraeus, the scholar-warrior tapped by Bush to salvage the U.S. war in Iraq, is settling in for the long war.

Having assumed command of all U.S. forces in Iraq earlier this year, Petraeus warns the war is not “going to be resolved in a year or even two years.” In fact, he predicts that the counterinsurgency effort could last “at least nine or 10 years.”

With a Ph.D. from Princeton University, he exemplifies the new breed of warrior who combines scholarly insight, cultural understanding and steely determination. Despite his high profile, Petraeus’ record has largely escaped scrutiny. If any one general symbolizes the failure that is Iraq, it is Petraeus. Having served in multiple positions in Iraq since the 2003 invasion, Petraeus bears enormous responsibility for the Iraq debacle. And he hasn’t seemed to have learned anything as he is replicating policies that deepened the quagmire in the first place.

Petraeus is green-lighting the funding and arming of Sunni militias in strife-wracked Al Anbar province for the stated purpose of routing Al Qaeda in Mesopotamia. But it is also part of the Bush administration’s overall Middle East strategy.

Petraeus and the White House are forming Sunni militias apparently as a counterweight to Shiite militias and parties that it helped bring to power in Iraq and which they see as an Iranian fifth column.

Wherever the Bush administration looks in the Middle East, it sees an Iranian hand. This was not how it was supposed to be. Prior to the invasion of Iraq, neo-cons were crowing that “the road to Tehran runs through Baghdad.” In the Gaza Strip, The White House labels Hamas an Iranian proxy; ditto for Hizbullah in Lebanon. In Iraq, it describes various Shiite forces as in thrall to Iran’s mullahs. In Afghanistan, it charges that Iranian weapons are flowing to the Taliban.

Its obsession has become self-fulfilling, turning these separate wars into a regional clash of Sunni versus Shiite. Even with Iraq, Afghanistan, Lebanon and Palestine locked in conflict and the spillover threatening to drag in neighboring countries, White House operatives are itching for the biggest fight of them all: a war against Iran.

Scooping the mainstream media, Steven Clemmons of thewashingtonnote.com wrote in late May of how Vice President Cheney and his staff were planning an “end run strategy” around Bush by colluding with Israel to launch a small-scale attack against Iran in the hopes it would strike back at U.S. forces in the Persian Gulf and ignite a full-blown war. Part of the strategy is to have neo-conservatives push publicly for war. John Bolton recently pronounced, “Regime change or the use of force are the only available options to prevent Iran from getting a nuclear weapons capability.” And Commentary editor Norman Podhoretz fired his shot in an article entitled, “The Case for Bombing Iran.”

Former U.S. Ambassador to Israel Martin Indyk told Seymour Hersh, “The White House is not just doubling the bet in Iraq… It’s doubling the bet across the region.” Hersh writes that this amounts to a “new strategy” termed a “redirection.” It’s bringing “the United States closer to an open confrontation with Iran and, in parts of the region, propelled it into a widening sectarian conflict between Shiite and Sunni Muslims.” He adds, “A by-product of these activities has been the bolstering of Sunni extremist groups that espouse a militant vision of Islam and are hostile to America and sympathetic to Al Qaeda.”

This is the situation in Iraq.

In June 2004, Petraeus took the assignment of organizing training for all Iraqi military and police forces following their collapse during the Shiite and Sunni uprisings two months earlier.

During this period he was instrumental in forming government-sponsored militias throughout Iraq that operate as anti-Sunni death squads to this day, and which have plunged the nation into civil war. In the fall of 2004, Petraeus was arming, equipping and funding the Special Police Commandos, calling them “a horse to back.”

Petraeus said he aided them because, “I want to get the hell out of here.”

But rather than taking over the fight, the commandos (renamed the national police) have become another side in the war, operating as Shiite-run death squads. By early 2005 the 10,000-strong Special Police Commandos were reportedly disappearing, torturing and murdering Sunni men. Investigative reports detailed scores of incidents in which Sunni men who were detained by the commandos were later found tortured and killed. This death squad activity was going on under Petraeus’ command, and was a critical factor in turning the Sunni Arab community wholesale against the Iraqi government. His role in the $15 billion U.S. effort to train the 350,000 Iraqi security forces on the books is even more dismal.

Writing in the Washington Post in September 2004, Petraeus argued “18 months after entering Iraq, I see tangible progress. Iraqi security elements are being rebuilt from the ground up.” He spoke glowingly of Iraqi leaders “stepping forward, leading their country and their security forces courageously,” and listed the various outfits that were being trained “to shoulder more of the load for their own security.”

Exactly one year later, as Petraeus was packing his bags to assume a new command stateside, of the nearly 100,000 Iraqi troops that had been “trained,” only one battalion was capable of independent combat operations. In June of 2007, with the latest U.S. escalation complete, all talk of Iraqi security forces “taking over the fight” has disappeared. And so have Iraqi units, which are plagued with a desertion and absentee rate of more than 25 percent.

These days it seems the only Iraqis in the fight are either involved in death squad activity or attacking U.S. forces. The New York Times reported recently that Iraqi police have been caught cooperating with insurgents planting improvised explosive devices used against Americans while Iraqi soldiers have been killed in combat against U.S. troops in Baghdad.

In late 2005 Petraeus assumed command at Fort Leavenworth, Kansas, where he oversaw training programs for the entire U.S. Army. While there, he also co-wrote the U.S. military’s first manual on counterinsurgency warfare in 20 years. His recommendations included setting up “Specialized paramilitary strike forces,” “home guards to provide local security” and “paramilitary units.”

This is precisely the strategy in setting up Sunni militias in Anbar province under the umbrella of the “Anbar Salvation Council.” This is an old strategy, one with a grim historical record.

The New York Times notes that “providing weapons to breakaway rebel groups is not new in counterinsurgency warfare, and that in places where it has been tried before, including the French colonial war in Algeria, the British-led fight against insurgents in Malaya in the early 1950s, and in Vietnam, the effort often backfired, with weapons given to the rebels being turned against the forces providing them.”

In the Ramadi region, Petraeus endorsed a plan to arm and pay thousands of irregular forces that have all the makings of Sunni militias. Many of the Sunni groups the military is reaching out to “have had past links to Al Qaeda in Mesopotamia.” Like their Shiite militia counterparts, there is the “possibility that some local leaders are using newly armed tribal members as their personal death squads to settle old scores.”

This is entirely a Pentagon effort. Eight policemen told the Washington Post that “the U.S. military was giving them weapons, money and other materials such as uniforms, body armor, helmets and pickup trucks [and] paying salaries of up to $900 a month to tribal fighters.”

The New York Times notes that “some American officers” say arming Sunni groups, “could amount to the Americans’ arming both sides in a future civil war.” There is the risk “that any weapons given to Sunni groups will eventually be used against Shiites or against the Americans themselves.”

In fact, this looks to be deliberate observes the Times: “the Americans seem to have concluded that as long as the Shiites maintain their militias, Shiite leaders are in a poor position to protest the arming of Sunni groups.” One aide to the Iraqi Prime Minister blasted the American strategy, “We have enough militias in Iraq that we are struggling now to solve the problem. Why are we creating new ones?”

This is the twisted landscape of the Iraq War. What began as a war to remake the Middle East has boomeranged. The Bush administration is fighting the Iraq War as an extension of the regional disaster it has spawned. Its goal is not even to stabilize Iraq, it is to create more chaos so as to counter Iran, Shiite movements and the broad array of Sunni-based resistance groups.

None of this would be possible if the home front were not blissed out on shopping and celebrities. With the Democrats’ capitulation to Bush and Cindy Sheehan’s bitter exit, there is little left of a national antiwar movement. Bush may only have 18 more months to go, but the domestic disconnect — why oppose Bush’s wars when he’s headed out the door? — gives the administration freedom to fan the flames of war in the Middle East.