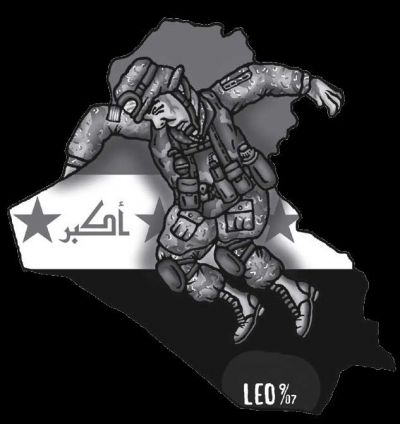 Iraq, the one we hear about and see, swirls about in an endless loop of history.

For more than four years now, U.S. troops are always about to be withdrawn, Iraqis are always taking the initiative, the terrorists are always being defeated, Iraqi forces are always joining the fight, the government is always making progress.

Despite all the media heat Gen. David Petraeus and U.S. Ambassador Ryan Crocker generated in their congressional appearances, they regurgitated the same old rhetoric. Petraeus prattled on about “military measures … being met,” Iraqi security forces continuing to “shoulder more of the load,” and “significant blows to Al Qaeda-Iraq.” Crocker piped in with pabulum about “the seeds of reconciliation are being planted,” “Iraq’s leaders have the will to tackle the country’s pressing problems” and “the commitment of its leaders to work together on hard issues is encouraging.” All these assertions are blatantly false.

More and more of Iraq has descended into warfare, the parliament is little more than a fight club on the rare occasions it meets, the government is verging on collapse, Iraqis aid U.S. forces only as a means to gain weapons to use against rivals, and the security forces are ill-trained, poorly equipped, and incompetent if not actively fighting the Americans.

But the administration propagandists know that after almost five years of war they must temper their optimism with warnings that we must “stay the course” in Iraq for if we do not — take your pick — civil war will break out, genocide will result, the terrorists will export holy war or the whole Middle East will burn.

These assertions are closer to the truth, but conveniently obscure the fact that the Bush administration is the primary culprit. It fomented the civil war; genocide is probably already occurring with the Sunni Arabs the victims; and it was the war that both turned Iraq into a terrorist haven and threatens to regionalize the conflict, creating a greater Middle East war.

Genocide is a strong term, but that’s the on-the-ground reality: first, the counterinsurgency mainly targeted Sunnis, then, U.S. forces set up Shiite militias that have waged a death squad campaign against Sunnis, now, as even pro-war columnist Thomas Friedman concedes, the current strategy is based on fueling a “Sunni-Sunni war.” By all measures, Iraq is this young century’s most savage killing field. Yet this has not fazed the White House with its two-faced message of spouting boundless optimism alternating with “we have to be patient until we win” sloganeering.

And even as the cast of characters changes — different U.S. generals, new Iraqi leaders, an enemy that shifts from Ba’athist to Shiite militias to Al Qaeda and back — the rhetoric remains the same.

Herein lays another layer of the White House strategy. When it says “success in Iraq,” it’s not talking about bringing peace and stability. Success, instead, means prevailing over its domestic opposition: Democrats, opinion makers, the antiwar movement.

To prevail, the Bush administration is not seeking a coherent debate. Precisely the opposite.

It wants the debate to remain confused so the public and Congress stay divided and doubtful of full withdrawal, the best of many bad options and only sensible solution.
Success for Bush, ultimately, means winning the political battle to keep the occupation going full force until the end of his term and dumping the problem on his successor.

The next president, probably a Democrat, can then choose between presiding over a disaster that threatens to destabilize the whole Middle East or trying to extricate U.S. forces under withering salvos from the chickenhawks of “retreat and defeat.” The hand-wringing in the media and in Congress is an integral part of the propaganda treadmill. The fact that the media takes the Bush administration’s flak catchers seriously reveals its complicity. The “surge twins,” as Maureen Dowd labeled them, piled on flimsy lies that are reported on with gravitas and given on-the-one-hand and-on-the-other treatment that leaves the picture clouded.

Meanwhile, the Bush administration will move on to a new set of lies, which are just old ones repackaged. The Democrats will fuss and fulminate but then dutifully finance the massacre as they have for five years. Antiwar “leaders” will continue to tell activists to march in circles and “phone and fax and email your representatives” to no effect (instead of pushing for a broad campaign of mass resistance to Democrat and Republican war makers alike). And Bush, Cheney, Rice, et al, will publicly wear their smug satisfaction of having successfully passed the buck.

Then they can spend their remaining year in office plotting on leaving Americans with the ultimate gift that keeps on giving: a war against Iran.

This is success in Iraq.