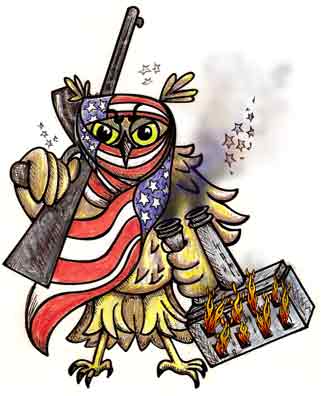 As the confrontation between radical environmentalists and timber companies over old-growth logging intensified in the Pacific Northwest through the 1990s, a new threat to national security emerged: “eco-terrorism.”

The word “eco-terrorist” first appeared in a March 1990 article in The Oregonian about a “tree-spiking” tactic used by the environmental group Earth First!. Three months later, Rep. Denny Smith (R-Or.) deployed the term in a stage-managed White House meeting to lobby against stricter environmental legislation in the Pacific Northwest.
By the mid-1990s, the radical environmental movement was divided over the debate on tactics, with some favoring using only nonviolent civil disobedience while others favored property destruction. The timber industry and their supporters continued to inveigh against “ecoterrorism,” and when the Earth Liberation Front (ELF) began its campaign of highprofile sabotage in 1997, the FBI went on high alert.

By May 2001, then-FBI director Louis Freeh told Congress that the ELF and Animal Liberation Front (ALF) represented, “the most active extremist elements in the United States.” With CIA Director George Tenet sitting by his side, Freeh noted that, “some special interest extremists most notably within the animal rights and environmental movements,” were turning, “increasingly toward vandalism and terrorist activity in attempts to further their causes.”

Conservative think tanks have fueled the debate. The word is loved by antienvironmental champion Ron Arnold, Executive Vice-President of the Center for the Defense of Free Enterprise and author of EcoTerror: The Violent Agenda to Save Nature, the World of the Unabomber. He was a paid as an expert consultant on ecoterrorism for the University of Arkansas Terrorism Research Center.

“Our goal is to destroy, to eradicate the environmental movement … We’re mad as hell. We’re not going to take it anymore. We’re dead serious — we’re going to destroy them,” Arnold was quoted saying in a 1991 Toronto Star article.

In 2006, Congress passed the Animal Enterprise Terrorism Act (AETA), a draconian piece of legislation that classifies as terrorism civil disobedience actions —such as blockades, trespassing, property damage and the freeing of captive animals — taken against businesses that use or sell animals. Several states have also passed related “eco-terrorism” legislation. What has been left unanswered since the word “eco-terrorism” entered the public vocabulary 17 years ago is the question of who the real criminals are. Are they the corporations that destroy the natural world for private gain? Or, rather the people who sabotage the tools used to carry out this destruction?