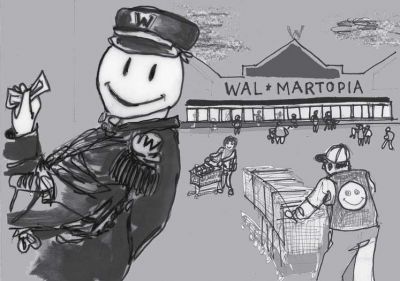 Walmartopia is playing at the Minetta Lane Theatre, 18 Minetta Lane, Tuesdays through Sundays.

The last few years have seen a number of works dealing with the misdeeds of the world’s largest retailer and its big-box cohorts, yet none has conveyed them with the élan that is only possible in musical theater.  The form calls for a few dramatic conventions: a struggle against impossible odds, a few spotlit monologues, and at least a hint of romance. Walmartopia, by Catherine Cappellaro (book) and Andrew Rohn (music and lyrics), gives us all of these, while weighing key issues such as workplace discrimination, union busting, environmental destruction and the mind-numbing homogeneity of corporate culture. With its tongue firmly in its cheek, Walmartopia reveals the savage sneer behind the bright-yellow smiley face.

The story centers around Vicki and Maia, a mother and daughter who work at a Wal-Mart in Madison, Wisc. (which is home to the musical’s creators and more than a dozen Wal-Marts). Vicki (Cheryl Freeman) begins the musical believing that her hard work alone will get her and her daughter out of their motel and toward a better life. Then her manager again passes her up for promotion during a meeting held at Hooters, and her friend Miguel is fired for trying to organize a union.

Next we travel to a meeting of Wal-Mart executives led by CEO Mr. Smiley (John Jellison), a perfect blend of smarmy greed and sexual ambiguity. To salvage the company’s reputation, which has been tarnished by a sex-discrimination lawsuit and reports that its products are made in Chinese sweatshops, the board of directors mounts a musical promoting Wal-Mart values, featuring the song “A Woman’s Place is at Wal-Mart.” Meanwhile, deep below them in the bowels of Wal-Mart headquarters in Bentonville, Ark., Dr. Normal (Stephen DeRosa), an anything-but-normal flamboyantly mad scientist, has developed the ultimate predictor of market trends: a time-travel portal. Testing it on Vicki and Maia (Nikki M. James), the board transports them to 2036, when Wal-Mart has established Wal-School, Wal-Prison and yes, even Wal-Arts.

In the climax, Vicki and Maia star in Wal-Arts’ musical to rally support for Wal-America’s war to liberate the newly independent nation of Vermont, where an evil insurgent minority of overallswearing, puppet-making socialist hippies is holding the population hostage.

The campy absurdity of the musical only works because our present reality is so bleak. The lyrics of many of these songs could be used by the Bush attachés to promote their next surge in Iraq or an invasion of Iran. Musical theater is disarming and audience friendly, but the message in Walmartopia rings through as serious and urgent.  Rohn’s songs have a home-grown sound, true to Walmartopia roots in community theater. Expertly arranged by August Eriksmoen and sung by a skilled cast, the songs are at once exuberant and thought-provoking and overcome their camp. The finale is an almost Brechtian invocation to the audience to get out of their seats and do something, and while doing it, to keep singing.