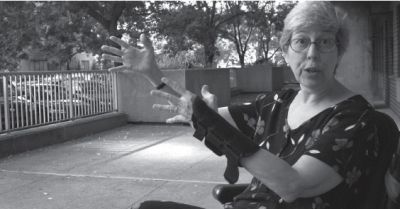 By Steven Wishnia
In an attempt to curtail rent-gouging by landlords leaving the Mitchell-Lama program, the state’s housing agency has proposed eliminating a loophole in the law the “unique or peculiar circumstances” provision — that owners have used to escape rent regulations.

New York State Division of Housing and Community Renewal (DHCR) wants to change its rules so that landlords cannot claim “unique or peculiar” increases simply because they have taken apartments out of Mitchell-Lama or a similar program. Tenants in Mitchell-Lama buildings built before 1974 are supposed to be protected by rent stabilization if their landlord opts out of the program. But several owners, most notoriously Laurence Gluck of Stellar Management, have argued that they were entitled to unlimited rent increases because leaving the program constituted “unique or peculiar circumstances.” In 2005, the state’s highest court ruled that the DHCR could grant such increases in most of the affected buildings.

There are now 24 “unique or peculiar” applications pending before the DHCR, including buildings with almost 5,000 apartments. Eleven of them come from Stellar, perhaps the landlord most aggressive at removing buildings from Mitchell-Lama. Another 17,800 apartments still in the program would also be protected if the DHCR adopts the proposed change. In the DHCR’s hearings on the proposal Sept. 24 in Manhattan, tenants and activists sounded several common themes. Protecting Mitchell-Lama tenants is a crucial part of ameliorating the city’s housing crisis. These working- and middle-class tenants are the people who keep the city running and sustain community. There is nothing “unique or peculiar” about landlords leaving the program, and they made plenty of money while they were in it. And this proposed change is only a first step: It does not protect tenants in buildings from 1974 on, who are not covered by rent stabilization except in rare circumstances. 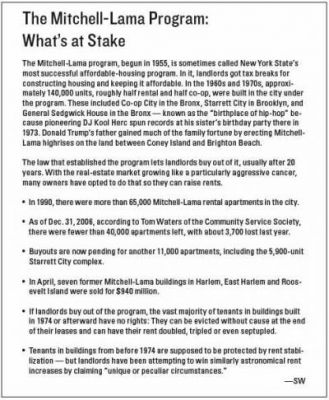 “We have stayed in our communities. We have built these communities,” said Darryl Allen, president of the tenants association at Bruckner Towers in the Bronx.

“We were not put here to be baby-sitters for this property so in 20 years our rent could be increased and we can be put out.” His rent, $694 a month, would go up to $741 under rent stabilization. Stellar is trying to raise it to $1,250.

The one witness who opposed the proposed change was Mitchell Posilkin, general counsel for the Rent Stabilization Association, a real-estate lobbying group. Dismissing the proposed change as a “political response to tenant activism,” he argued that landlords leaving Mitchell-Lama need large rent increases because the ones allowed under rent stabilization are “inadequate” —they’re not enough to cover the extra taxes landlords incur by leaving the program.

“If they thought it was going to be a hardship, they wouldn’t have left Mitchell-Lama,” responded Sue Susman, a tenant leader at Central Park Gardens on the Upper West Side. Stellar is trying to raise the rent for a low-income tenant’s one-bedroom apartment from $496 to $3,015, she said, and it wants to raise her rent from $1,000 to $5,275.

Sandra Rivera, a tenant at Independence Plaza North in Tribeca — a former Mitchell-Lama building not covered by rent stabilization, but where the Bloomberg administration arranged for some tenants to receive federal “enhanced Section 8” subsidies — broke down crying when talking about how Stellar had raised her rent from $900 to $5,600 and the city had terminated her Section 8 payments because of an alleged “change of household composition.” A customer-service worker for the city’s child-support agency, she said she makes $906 every two weeks and takes care of her disabled nephew.

Though the Mitchell-Lama program is usually considered middle-income housing, many tenants, especially the elderly, are closer to near-poor, said Tom Waters, a housingpolicy analyst with the Community Service Society. The median income in Mitchell-Lamas in 2005 was only $22,500 a year.

Several bills to deal with the situation passed the State Assembly this year but went nowhere in the Republican-majority state Senate. The current measure endorsed by many tenants at the hearing is S.5284/ A.7811, sponsored by Sen. Andrea Stewart-Cousins and Assemblymember Gary Pretlow, both Westchester Democrats. It would let the city and suburban counties or towns bar “unique or peculiar” rent increases and extend rent stabilization to all buildings leaving Mitchell-Lama, Section 8, or similar programs regardless of when they were built.

EMBATTLED TENANT: Sue Susman gestures outside her Upper West Side apartment. Susman’s
landlord is trying to use a loophole in the Mitchell-Lama housing program to raise her rent
from $1,000 to $5,275. Thousands of other Mitchell-Lama tenants face similar rent increases.
PHOTO: SAMANTHA LEWIS