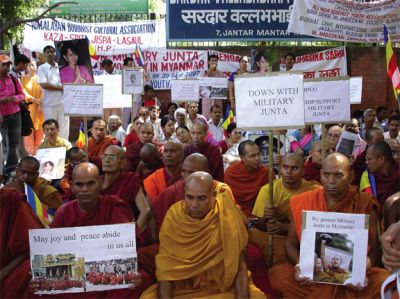 By Jessica Lee and John Tarleton

The streets of Rangoon, Burma’s largest city, fell eerily quiet in early October as the nation’s military junta struck back at Buddhist monks and other pro-democracy activists who joined a nonviolent uprising against the regime only weeks earlier. According to one senior Burmese military intelligence officer described as having defected to neighboring Thailand, the government crackdown is worse than anyone imagined.

“Many more people have been killed in recent days than you’ve heard about,” Hla Win told the (UK) Daily Mail. “The bodies can be counted in several thousand.” The 42-year-old chief of military intelligence in Rangoon’s northern region added: “I decided to desert when I was ordered to raid two monasteries and force several hundred monks onto trucks. They were to be killed and their bodies dumped deep inside the jungle.”

Burma’s latest round of unrest (see timeline) began Aug. 19 when the government announced it was hiking fuel prices by as much as 500 percent, an unbearably high burden on an already impoverished nation and a blow to the monks who rely on public charity. Scattered protests broke out across the country but student and pro-democracy demonstrators were quickly scooped up and arrested by the police. Then, unexpectedly, Burma’s revered Buddhist monks took up the protest cause and quickly shook the regime to its core.

Beginning Sept. 18, Rangoon saw seven straight days of increasingly larger marches through the center of the city led by thousands of crimson-robed monks who denounced the military regime’s leaders as “pitiless soldier kings.” Growing protests were also reported in a number of other cities around the country.

On Sept. 26, these soldier kings unleashed their troops, who cordoned off and then invaded many monasteries hauling away monks in military vehicles under the cover of night.

As for the military regime, most observers agree that it will not be easily toppled. Burma has vast natural gas reserves that are much-coveted by neighboring China and India while Chevron is the largest U.S. investor in Burma with its stake in the multi-billion dollar Yadana natural gas pipeline. The generals are also making millions off deforesting the old-growth forests of eastern Burma and selling the timber to China.

The revenues from selling off Burma’s natural resources enable the country’s military leaders to maintain a 400,000-man army. Besides suppressing urbanbased, pro-democracy protests, the junta has fought with the Karen, Shan, Mon and other restive ethnic minorities in eastern and southern Burma. Since 1988, 3,000 villages have been destroyed and 1.5 million people have fled to neighboring countries, according to the U.S. Campaign for Burma.

1990
The first free elections in almost 30 years are held, however the elections are annulled by the military regime after the National League for Democracy wins with an overwhelming majority .

1991
Aung San Suu Kei is, leader of the NLD opposition party, receives the Novel Peace Prize while under house arrest. She continues to be held prisoner.

Aug. 2007
The government increases the price of fuel by as much as 500 percent, sparking pro-democracy protests. Military violently represses activists, inspiring Buddhists monks to take action.

Sept. 5
The military injures three monks while suppressing a peaceful protest in Pakokku, setting off the “Saffron Revolution.”

Sept. 24
On the seventh consecutive day of monk-led demonstrations in the capital of Rangoon, as many as one hundred thousand people parade through the streets.

Sept. 28
The government shuts down the country’s only internet server and is said to be restricting text messages and photographs on cellular phones following days of police attacks on demonstrators.

Oct. 1
By the end of September, the junta had detained thousands of activists and monks. An unknown number have been tortured and/or murdered.

Oct. 2
U.N. special envoy Ibrahim Gambari completes a four-day visit in Burma, requesting the junta lift the repression of the peaceful protests and move in the direction of democratic reform and human rights.

Oct. 3
Mass disappearances are reported as security forces drag supporters of the failed uprising out of their homes in the middle of the night. At dawn, military vehicles patrol the streets with loudspeakers blaring: “We have photographs. We are going to make arrests!”

Top Photos (from Left to Right)

A Buddhist monk holds un upside down alms bowl during a peaceful march in Rangoon Sept. 24, a powerful symbol that the monks refused alms from the military junta. BMC

Hundreds of Burmese refugees demonstrate in New Delhi Sept. 30, urging India to act against the military oppression. SONESEAYAR.BLOGSPOT.COM
A murdered monk rots in a pool of water. Reports say that bodies of hundreds of executed monks have been dumped in Burmese jungles. ABCNEWS.COM

A murdered monk rots in a pool of water. Reports say that bodies of hundreds of executed monks have been dumped in Burmese jungles. ABCNEWS.COM

The military guards barricades near the Sule Pagoda monestary in Rangoon Sept. 27. 70,000 people violated police orders and marched after monestaries were vandalized and monks kidnapped the night before. U.S. CAMPAIGN FOR BURMA. 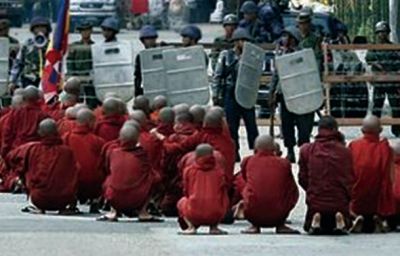 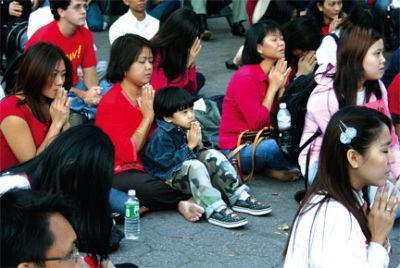 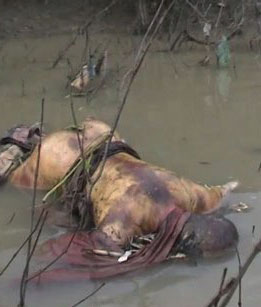 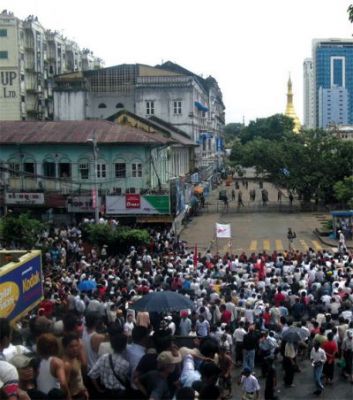