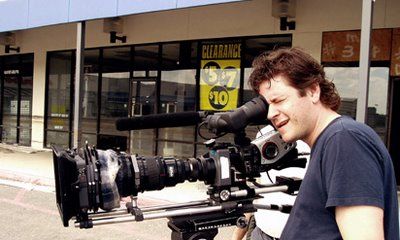 A Review and screening information for this film is available here:
http://www.indypendent.org/2007/10/06/a-review-of-desert-bayou-dir-alex-lemay/

Interview of Alex Lemay with The Indypendent’s Nicholas Powers
“They are not homeless they are houseless,” Alex Lamey says of the evacuees of New Orleans. It’s a thought out phrase, designed to cut the stigma of exile before it becomes a permanent stain. He does this careful sifting in his conversation and his cinematic work. Raised by radical parents, both professors, Lemay grew up with a clear moral compass that guided him to the crisis in New Orleans. His first documentary was The Bulls of Suburbia about suburban kids learning Spanish style bullfighting. Honing his skills on commercial work he made his second film on the evacuees of New Orleans.

Q. Of all the forms of film making why choose documentary?

A. I loved making movies since I was eight years old running around with my dad’s camera. Why documentaries? You can tell a great story and it’s less expensive. Also, documentaries mean something now, if it wasn’t for Michael Moore and Ken Burns we wouldn’t even be having this conversation. You can be an average guy with not a lot of bread, decent camera and give people a voice. Everyone’s life has meaning.

Q. Most people are not used to being in front of the camera. They get nervous and close up. How did you get past the armor?

A. When I first arrived it was clear they weren’t going to just open up. They are an intensely private and proud people. It took about three months of being with them until they opened up. Also, I was as open and vulnerable as I can be. When they felt that it helped them to let their guard down. Now we are close friends. If I don’t call I get my balls busted. They ask me, “where is a photo of the new baby”. We’re close friends now.

Q. In Desert Bayou, Clifford reveals his drug addiction. How did you get him to reveal that about himself and let the cameras in?

A. I struggled with drug and alcohol addiction myself and didn’t judge him. I told him, “Cliff you don’t need to bullshit me. You don’t feel comfortable in your own skin and you’re using drugs to keep your mind from going overdrive.”

Q. What is a myth about the evacuees that you discovered was false?

A. The myth is they all want to return. Some activists take the line that everyone needs to return to New Orleans and some yelled at me because the film showed people making a new life. They were mainly white liberals and what they didn’t get was that this was the film the evacuees gave me.

Q. Why are the evacuees ready to make a new life?

A. In the movie, Cliff says he got more done in five months in Utah than five years in New Orleans. I remember the sheriff telling me, “I’ve been fighting racism for 50 years.” I don’t have a dog in this fight but its so obvious, you can see it. When you go to the hotel, the cabbies and janitors are black but the workforce at the oil refineries which are 22 dollar per hour union jobs is less than 10 percent black.

Q. What do you see is the future of New Orleans?

A. It’s going to be Las Vegas.

Q. How do you see that happening?

A. Mayor Nagin is trying to close FEMA trailers and the real estate developers are circling the city like vultures. You see 200 homeless people in front of city hall and they are there to make a point. Before Hurricane Katrina there were 6,000 homeless and now with the city at a third of its original population there are 17,000 homeless. I saw a man with full blown AIDS out there and you know people are dying.

Q. After the movie finds its audience what are planning to do?

A. We are planning to haul two FEMA trailers across country and park them right in front of city hall at New Orleans.