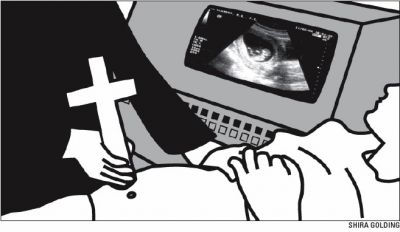 By Eleanor J. Bader
When Republican presidential hopeful Ron Paul, a Texas Congressman, addressed the National Right to Life Committee in June, he told the audience about his friend, former abortion provider Bernard Nathanson. “Nathanson did 65,000 abortions before the ultrasound came out, but when he saw the beating heart, he couldn’t do them anymore,” Paul reported. “If we’re going to end abortion, people have to look at the baby [sic].” Anti-abortionists agree and have introduced mandatory sonogram legislation in state legislatures across the country. Their intent is to force women to view ultrasound footage before having an abortion. Idaho and Mississippi already impose this requirement and 11 states require abortion providers to apprise patients of their right to see a sonogram if they desire.Sonograms — high-frequency sound waves that float through the amniotic sac, abdomen and pubic cavity to create an image of the fetus and placenta — are routinely used to confirm fetal age and due date, check embryo growth and development, identify ectopic pregnancies and forecast gender. They are performed by obstetricians, gynecologists and abortion providers five to six weeks after a woman’s last menstrual period. In addition, nearly one quarter of the country’s approximately 3,000 Crisis Pregnancy Centers use them to harangue women into carrying their pregnancies to term.

As those opposed to abortion see it, once a woman views the fetus, she will be unable to end its life. Richard Land, Ethics and Religious Liberty Commissioner of the conservative Southern Baptist Convention, is widely credited for popularizing this idea. “If wombs had windows,” he says, “people would be much more reticent to abort babies because they would be forced to confront the evident humanity of the baby from very early gestation onward. Pregnant mothers who see their babies on sonograms are far more likely to carry their babies to term.”

Not true, say abortion providers. Instead, they see the campaign as little more than guilt-mongering and charge that it infantilizes women because it assumes that they have no understanding of what they are about to do when they enter a clinic. “Look,” says Peg Johnston, director of Southern Tier Women’s Services in Vestal, New York, “women are not always clear about the stages of fetal development, but they always know that if they don’t have an abortion they will have a kid. Of course they know this is about life. Seeing a sonogram may make them feel bad, but they will still have their abortions and then go home and continue their lives.”

Cristina Page, author of How the Pro-Choice Movement Saved America, likens the requirement to taunting since virtually all clinics already allow a woman who wishes to see a sonogram to do so. “If seeing an ultrasound before an abortion becomes required, so should telling the woman that an embryo/fetus cannot feel pain before the twentieth week of pregnancy,” she says.

What’s more, Page says that forcing women who are terminating pregnancies due to developmental abnormalities —often not discovered until late in the second trimester — to view fetal images amounts to vindictive cruelty. While she believes that “more information is always a good thing,” she says that forcing ultrasounds on women is unnecessary.

Not surprisingly, the American Medical Association, the American Public Health Association, the American College of Obstetricians and Gynecologists, and the American Medical Women’s Association oppose forcing women to view the fetus. They argue that the test should be used as a medical tool, not a political sledgehammer. Nonetheless, they — as well as abortion clinics and their allies — expect numerous fights on this issue during the 2007-2008 legislative session. Once more, two distinct worldviews will face off. Time will tell whether the law will opt to treat women as capable decision makers or, like Ron Paul and Richard Land, will treat them like children in need of protection, mindless souls who know not what they do.
Illustration By Shira Golding