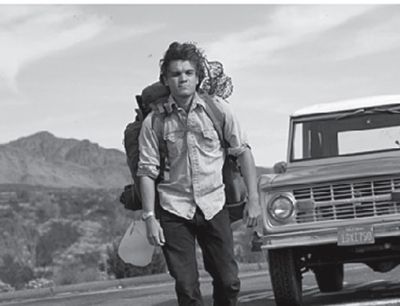 An adventure epic that will likely grab you by the heart but leave you feeling disillusioned and helpless, Into the Wild follows the story of 24-year-old Christopher McCandless’ two-year cross-country trek from college graduation to his deathbed in the Alaskan wilderness. When his body was found decomposing in an old bus near Denali National Park in 1992, McCandless’ story captured the attention of bestselling author Jon Krakauer. Krakauer’s 1996 biography in turn deeply inspired director Sean Penn, who spent the last ten years making the film.

Penn demonstrates his commitment to McCandless’s story by carefully following 22-year-old Emile Hirsch, who plays McCandless, from Georgia to Arizona, South Dakota, the Gulf of California and ultimately to Alaska, and by including clips of McCandless speaking aloud his thoughts and scribbling letters and entries in his journal — some of which are actually written across the screen in large yellow letters.

Although Penn tells this tale with a degree of authenticity and beauty, he fails to deliver a story rooted in historical context and contemporary cultural dialogue. This film falls short on transcending America’s shallow fascination with the wandering romantic intellectual.

To understand why a top student at Emory University would donate his $24,500 savings, burn his social security card, sever ties to his wealthy family and head west alone to seek truth by hitch-hiking, walking and train-hopping, one must look deep into American history. Moviegoers cannot forget that the realities of America today are the direct result of a three century-long push for progress from East to West coast, by the conquest of native indigenous cultures and conversion of the natural landscape through the barrel of a gun and the uncompromising righteousness of the European pilgrims and settlers. Today’s American is raised in the richest nation on earth, in a culture of materialism and consumerism, classism and rugged individualism, which encourages us “to be all we can be” within the hollow existence of the solo American dream.

While McCandless is clearly dissatisfied with his privileged life and with his parents’ wish for him to pursue a law degree at Harvard University, Penn fails to take a deeper look on how America’s tainted and controversial past could possibly have influenced this desire to “get away from it all.” Eco-psychologists contend that a person’s mental health can be directly correlated to her or his relationship to the natural world (or lack thereof). The massive destruction of the American environment in the last 150 years by urbanization, the conversion of raw materials into profit and widespread pollution is certainly an overlooked factor in why McCandless might have wanted to flee to wilderness.

Cultural critic and environmentalist Derrick Jensen explored the relationship of his violent father to the historical legacy of the destruction of Western civilization in his 2004 book, A Language Older than Words. While Penn does not shy away from exposing McCandless’ childhood pain from his patriarchal, abusive father and submissive mother, neither does he explore it further, leaving the viewer blaming McCandless’ family rather than society. Fortunately, Penn allows us some degree of reality to trickle into the film by letting McCandless’ sister provide narration of her brother’s disappearance and ultimate death.

It is no surprise that McCandless was obsessed with Alaska. The “last frontier” has captured the imaginations and thirst for a life outside of industrial civilization for the last 100 years in American literature from Jack London, Aldo Leopold, John Muir, James Michener and Edward Abbey authors of several of the books he packed with him across the country. While viewers might be inspired to pick up these authors and a copy of Krakauer’s book, the film ought to make a deeper impression on how we can challenge the destructive American paradigm by building sustainable lifestyles more integrated with nature.

It should not be surprising that hordes of New Yorkers packed the theater opening weekend in late September. Cinematographer Eric Gautier, known from his work in The Motorcycle Diaries, provides sweeping views of snow-capped mountains, the Arizona desert and the Midwest prairies, images that are in themselves an escape from a world of right angles and noise, concrete below and a cushion of pollution above.

It is too easy to experience the movie as if it was about fictitious people and places that are dissimilar and are separate from all of us. This film is not to be digested solely as latest great work of cinema, but rather should be a launching pad for finding greater insight into the perverse and critical socio- and environmental moment. —Jessica Lee

Hudson Is Not My Hero: Anniversary Highlights 400 Years of Exploitation