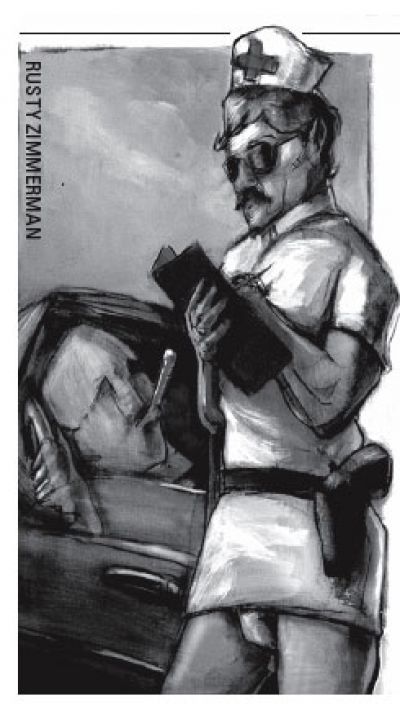 If you are one of the 47 million Americans who cannot afford the on-average $4,000 to $11,000 in annual premiums for individual or family health insurance or do not have the option of purchasing employer-based health insurance at all, don’t worry. “Universal health care” may be just around the corner. Under plans put forward by the leading Democratic presidential candidates, the solution is simple: make it illegal for Americans not to have health insurance.

“The approach of making people buy coverage, but not actually changing the health care system to make it affordable, doesn’t work. It leaves the health-care insurance companies in the middle of the health care system, continuing to waste billions of dollars,” said David Himmelstein, associate professor of medicine at Harvard Medical School and cofounder of Physicians for a National Health Program. “Criminalizing the uninsured is not really a reasonable approach to solving the health care issue.”

Her plan, which will cost an estimated $110 billion annually, promises to rein in insurance companies by forcing them to accept all applicants who can pay premiums. However, the plan also emphasizes “personal responsibility” by requiring that all individuals purchase health insurance if they can afford it. Those who cannot afford to pay will be given government subsidies toward the purchase of private health insurance.

Clinton’s plan is nearly identical to presidential hopeful John Edwards’ plan — so much that Elizabeth Edwards accused Clinton of stealing her husband’s ideas—while Barack Obama has proposed a plan that requires employers to contribute toward health coverage for their workers and mandates that all children have insurance.

However, in order for these plans to work, the government has to “have the teeth to essentially punish the uninsured,” said Benjamin Day, the executive director of Mass-Care, a single-payer advocacy group in Massachusetts.

In Massachusetts, a similar individual mandate passed in April 2006 has already run into problems. Massachusetts residents were required to purchase health insurance by July 2007 or face an initial $1,000 fine. In subsequent years, the fine could be as much as half the cost of paying health insurance premiums. Under employer-based plans, a year’s worth of coverage in Massachusetts costs an average of $4,200 for an individual and $11,400 for a family of four. “There’s a bigger penalty for being uninsured than there is for beating your wife or driving drunk,” said Himmelstein.

Many Massachusetts residents ignored the July 1, 2007 deadline to purchase health insurance, which forced the state to push the requirement back until the end of the year. “When the end of the year comes about, there’s going to be 200,000 to 300,000 people who should be fined for being uninsured,” said Day. “Are they going to fine all those people?”

Day and Himmelstein both say they see the Massachusetts law as a failure and are advocates of a single-payer system, which would pool tax dollars into a health care program similar to Medicare, without relying on private insurers.

Himmelstein calls a single-payer system “the only system that will actually work.” Physicians for a National Health Program has estimated that a single-payer system would save at least $300 billion dollars a year in health care costs — which will soar to $2.2 trillion in 2007. “A single-payer system could save an enormous amount and also could simplify a lot of the system,” said Himmelstein. “The evidence is just so overwhelming. There’s not even an academic debate that single-payer is the best way to go, no evidence that there’s any other way to go,” said Day. Despite this, only one of the Democratic candidates, Rep. Dennis Kucinich, (D-Ohio), is calling for a singlepayer health care system.

“The only thing you hear is that singlepayer is not politically feasible; that’s just a lack of leadership,” said Day. “Imagine if people had told us that during the women’s suffrage movement, or civil rights, that it wasn’t politically feasible and if they said, ‘Okay, let’s fight for something less.’ We just need to find actual leaders who are willing to fight for that right, instead of censoring themselves in advance.”

Physicians for a National Health Program, a single-payer advocacy group, estimates that a single-payer universal health care system could save $300 billion annually by reducing administrative costs. Presidential hopeful Rep. Dennis Kucinich (D-Ohio) is the only Democratic candidate with a proposed plan for a universal, single-payer, not-for-profit health care system. Healthcare Now!, a national coalition of groups calling for healthcare reform, is pushing for the passage of H.R. 676, a bill co-introduced in February 2005 by Kucinich and Rep. John Conyers (D-Mich.). Called the “Expanded and Improved Medicare for All Act,” H.R. 676 proposes a single-payer, universal health-care system similar to Medicare and currently has 78 co-sponsors.