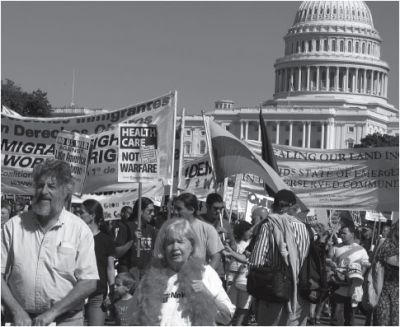 By Jessica Lee and John O’Hagan

More than four years after massive protests preceded the U.S.-led invasion of Iraq, a divided antiwar movement finds itself hard-pressed to put large numbers of people in the streets. Roughly 50,000 people turned out for a Sept. 15 antiwar demo in Washington, D.C. sponsored by International ANSWER (Act Now to Stop War and End Racism) and scattered, decentralized protests took place across the country during the Sept. 21 “Iraq Moratorium.” On Sept. 29, the Troops Out Now Coalition (TONC) drew a much smaller crowd to the nation’s capital to participate in its march to “Stop the War and Fight Racism at Home.”

TONC’s march, which had more than 1,600 endorsers and about 5,000 participants, followed a small, week-long encampment on the lawn of the U.S. Capitol building that saw protesters pitch tents and set up tables. The reason was simple: put constant pressure on Congress to end the war and address domestic issues. Said Laura Bickford, a member of University of North Carolina Students for a Democratic Society (SDS), “New Orleans still isn’t built due to the war. Healthcare is not happening due to the war.” Asked about the intended effect of the encampment, she answered “In terms of media, I do not think they care. This was for Congress’ attention.”

Seeking to further connect the war to domestic issues, Troops Out Now organizers led the march by the Department of Health and Human Resources, the Immigration and Customs Enforcement Agency and the headquarters for the Federal Emergency Management Agency (FEMA). There, several New Orleans residents spoke about conditions more than two years after Hurricane Katrina. “Let it be known that New Orleans is not where it should be,” said Sharon Johnson, a resident and co-founder of the Common Ground Collective which has worked to help rebuild New Orleans’ Lower Ninth Ward.

The march returned to the Capitol where more than 75 SDS members sat down in a nearby intersection and vowed to be arrested before they would move. Upon realizing the road was already blocked by the police, they moved their human blockade to the nearby intersection of Constitution Boulevard and Pennsylvania Avenue. Traffic was blocked and police officers started re-routing traffic. “This is about civil disobedience.

This is about direct action,” said Daniel Foster of North Carolina State University SDS chapter. Just as politicians were not around the Capitol on the weekend, being late on a Saturday, not much traffic was in the area.

The next round of antiwar protests continues on Oct. 27 when United for Peace and Justice convenes regional demonstrations in 11 cities around the country including New York.

“ It’s important to protest at the nation’s capital because it has the best chance of making national press, unlike home in Madison, Wisconsin. And this is where the politicians are. When I get back home, I am going to start working with the public access station on antiwar coverage and work with the new SDS chapter that is forming, as well as join the coalition to get our national guard out of the war.” Miles Kristan, University of Wisconsin photo & film student who has taken a semester off to work with the antiwar movement.

VOICES FROM THE STREET

“In New Orleans, we are trying to get the city rebuilt the best we can. I came here so people don’t forget that after two years, we still need help and I want to spread the word to get more volunteers. I support stopping the war because people are losing their lives so young in Iraq, just like people lost their lives in Katrina, without just cause.” —Sharon Johnson, New Orleans resident and co-founder of Common Ground
“I am disgusted on what is going on and there is so much wrong with what’s going on. We need a third party because the Democrats are just the same as Republicans. They are trying to frustrate people from voting. At home in Amherst, Massachusetts, I have started going to meetings with the local ANSWER group.”
—Greg Brown, Massachusetts resident

“As a father who lost his son in Iraq, I am here to honor my son … to show people a way to grieve and a way to demand peace and justice. I brought my memorial to show grief in public. It is important for people go home to share with others this experience that you can have nowhere else.”
—Carlos Arredondo, father of Lance Corporal Alexander Scott Arredondo, 20, who was shot and killed by an Iraqi sniper in August 2004.

“It’s important to demand an end to war and occupation around the world and to stand with the people in Iraq. In Raleigh, I do counter-recruiting work with SDS. When you cannot afford education, you are forced to join the military with the promise of education.”
—Ben Carroll, University of North Carolina sophomore and member of SDS and Fight Imperialism Stand Together (FIST)

It’s important to protest at the nation’s capital because it has the best chance of making national press, unlike home in Madison, Wisconsin. And this is where the politicians are. When I get back home, I am going to start working with the public access station on antiwar coverage and work with the new SDS chapter that is forming, as well as join the coalition to get our national guard out of the war.”
—Miles Kristan, University of Wisconsin photo & film student who has taken a semester off to work with the antiwar movement.