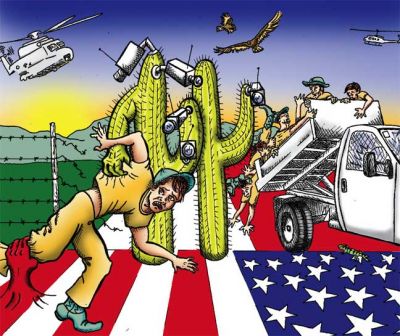 NOGALES, MEXICO — Six men sit in a row on wooden benches, their feet badly blistered after spending four days walking through the Arizona desert to enter the United States. Although they paid thousands of dollars for a guide, U.S. Border Patrol agents were able to find their group, apprehend them and deport them to Mexico.

The young men’s story unfolds as Maryada Vallet, a volunteer with the humanitarian aid organization No More Deaths, begins to clean and bandage their feet in July. In Spanish, the men explain that they are from Veracruz, a state in southern Mexico that is rich in oil but poor in jobs.

Vallet is one of many who have given aid to the thousands of people who try to cross the border by walking through the desert, but were caught and deported.

She meets them at an aid station set up in a small dirt parking lot in Nogales, a booming border town that is divided by the Arizona- Mexico border. The spot overlooks a metal wall, which stretches through a deep ravine a hundred yards away. On the other side, U.S. Border Patrol and National Guard troops keep watch day and night.

This group of men had tried to cross away from the watchful eye of U.S. agents, about 50 miles to the west where the desert is wide open and only an old barbed wire fence marks the international boundary. Early in the morning, a helicopter had flown over them in the desert and began circling over their group, the men said. Some had run away, and their guide disappeared. Shortly after, migra, or U.S. Border Patrol agents appeared and took them into custody.

By that afternoon, they had been transferred to a bus, taken to a processing facility, put on another bus and then dropped off at the U.S.-Mexico border away from the city center of Nogales, where they are forced to limp back into Mexico. “We had no idea the desert was like this,” one man says. “It’s the land of the devil.”

Temperatures regularly exceed 100 degrees for days on end during the summer. On this day in late June, it was over 110 before noon.

Although their spirits were low, they were thankful to be alive and said they will try to cross again. Vallet explains how important it is to rest and let their feet heal.

She then asked if they had received food or water while being held in U.S. custody.

“Only a bottle of water,” one man replied. None had received any medical attention for their feet.

After finishing her medical work, Vallet begins to fill out an abuse documentation form, another aspect of her work with No More Deaths.

She thumbs through forms on a clipboard. “This one from a couple weeks ago, this guy was carried off the bus by his friends because he was in diabetic shock and couldn’t walk,” she reads. “People with broken ankles and open wounds denied medical care. BP agents using tactics like sleep deprivation and verbal abuse. Agents beating people or throwing them into barbed wire fences if they try to run away.”

The forms are being compiled into an abuse report, which the organization hopes to have published by the end of the year.

For migrants, the abuse is just another obstacle that must be dealt with. After being deported, many try to cross again — as few have anything to go home to.

A CHANGE IN HUMAN SMUGGLING

A man with teardrops tattooed under his eyes walks by where Vallet has just finished treating the six men. She knows him, he spent the entire spring working as a humanitarian aid volunteer with No More Deaths after being deported from Los Angeles. Now he’s a recruiter for a major human smuggling ring run by the Mexican mafia in Nogales. Since volunteers receive no money, the lure of big bucks from smuggling was hard to resist.

“We couldn’t provide him with anything,” Vallet said later. “He has to make a living.”

Vallet asks him to explain the basics of the business. 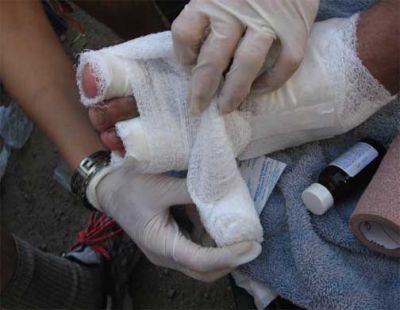 A person who wishes to travel into the United States pays up front or arranges for a later payment from family members. They get a couple nights in a shelter in Nogales to rest. Then they are divided into small groups, each led by a guide. If they are caught, they get two more tries. Since the recruiters maintain a constant presence near the aid station, it’s easy to reconnect with one’s smuggler, or coyote.

She asks where they cross the border. He says Border Patrol agents and other U.S. officials have been paid off by his cartel, so most of his human trafficking occurs either close to Nogales or through official ports of entry.

The mafia only recently became involved with smuggling people across the border. As the U.S. border security is increasingly tightened, the prices have dramatically increased so much that a load of human cargo can bring as much profit as drugs. 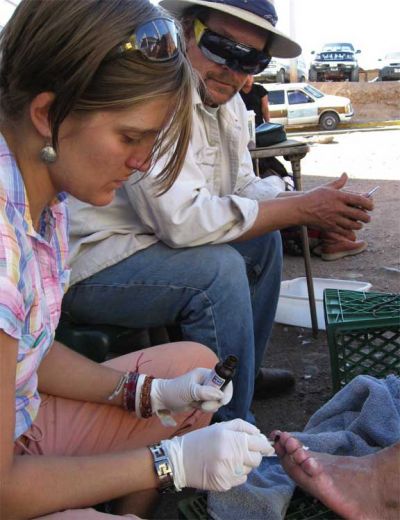 From Nogales, it now costs approximately $1,500 to get a coyote to sneak you across the border, he explains. If you’re starting from further south, like Guatemala, the price begins around $5,000.

The competition for business is fierce. Four coyotes were murdered at the beginning of September for recruiting on another group’s turf. Photos of their bodies covered the front pages of the Nogales daily papers.

As the group of men from Veracruz talk about their next move, Vallet spots a bus dropping off another load of deportees a quarter of a mile north on the U.S. side. It will take them about five minutes to walk across the border and arrive at the aid station. Many just stare at their feet, as they are paraded in a walk of shame in front of hundreds of cars waiting to get through the United State’s inspection station.

“It’s a cruel game of catch-and-release,” Vallet says. She tidies up her makeshift first aid area, and gets more supplies out of a storage shed.

“Until the U.S. ends their current policies of enforcement, until we start tearing down the walls instead of building them, it’s just going to cause more human casualties.”

THE WAR ON IMMIGRANTS

The past two years have seen a dramatic change in government policy towards undocumented immigrants in the United States. As part of the Secure Border Initiative passed November 2005, U.S. Immigration and Customs Enforcement (ICE) was given authority to confront the “problem” of 12 million people living and working in the United States without legal documentation.

The department has led dozens of armed raids across the country — both at home and at the workplace — and the deportation of hundreds of thousands of individuals. As a result of the raids and detentions, demonstrations have erupted throughout the country in support of comprehensive immigration reforms.

6,300 Increase in detention capacity along the Southwest border, by beds

26,000 The number of people in ICE custody on a daily basis

PHOTOS: SOLIDARITY IN ACTION: Maryada Vallet, a volunteer with the humanitarian organization No More Deaths, bandages the foot of a recently deported migrant in Nogales, Mexico.

The No More Deaths aid station provides medical assistance to thousands of undocumented migrants who are caught crossing the border through the Arizona desert and receive little or no treatment before being returned to Mexico by the U.S. Department of Homeland Security.