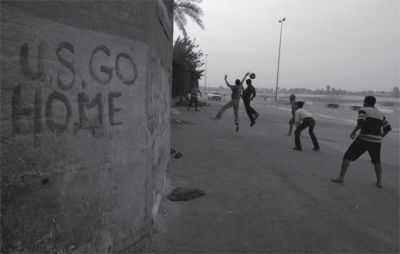 Meeting Resistance is the latest addition to a pastiche of films that give a picture of what is happening in Iraq. Filmed in 2003 and 2004, mostly in a single neighborhood in Baghdad, it describes a generation of resistance against the U.S. military and explores how, within some months, civilian killings, torture and roundup operations by the military had created pockets of support for resistance operations.

In extended interviews, 10 members of the Iraqi resistance tell their stories, detailing why Iraqis are fighting the occupation. Some clearly have links to the former government; others have Arabist sympathies. Though none claim allegiance to the Ba’ath Party, some appear to have formerly held rank.

This is the first work created for American consumption to be composed almost entirely of interviews with members of the Iraqi resistance. While material concerning the viewpoint of the Iraqi resistance is available (mostly online), extended footage of fighters and other members is rare. The film importantly includes members of the resistance who have functions besides fighting, including communications and funding. Those hoping for close-up footage of fighters and attacks, however, will be disappointed. Some action sequences have been added, but these scenes speak more to the simplicity of anti-U.S. militants than their ability to blow things up, which, at the time the film was made, was considerably more limited. Civil war and sectarian and ethnic cleansing had yet to begin.

The film gives a sense of the breadth and depth of the resistance: members hold various ranks in Iraqi society and have varying levels of education. Little focus is given to the mostly male interviewees’ lives outside of their roles as fighters. Only one of the 10 interviewed is a woman.

Many of the members use the word “Fedayeen,” a term formerly applied to some of Saddam Hussein’s elite units, and it seems clear that the group Bingham and Connors followed was created by a core of men who had previously fought together. These groups, often supported from Anbar province, formed a nucleus for resistance in 2003 that grew as Saddam Hussein was captured and paraded on television. They had become increasingly widespread by April 2004, when major fighting in Fallujah began and the photos of torture at Abu Ghraib were aired. This was also the time that working around resistance groups became markedly harder for Western journalists.

But before that, as Bingham and Connor’s footage attests, it was possible. Footage of the martyrs’ cemetery at Abu Hanifa mosque, the bombing of the mosque during the war and the streets of Baghdad’s Adhamiya neighborhood offer a window into the months immediately following the invasion. Fighters interviewed in December 2003 speak candidly about torture in Abu Ghraib prison. Most journalists ignored accounts given by Iraqis of the torture taking place until the photos appeared on television and in newspapers months later.

Even in 2003, Adhamiya was a dangerous place. The Iraqis interviewed are identified only by code names, and all the interviews but one are filmed out of focus, to prevent the images being used to identify the resisters.

These days Adhamiya is walled in by a U.S.-military-built partition, to prevent Shiite and Sunni militias from clashing. Residents of the neighborhood complain that the single entrance/exit there makes going out of the barrier dangerous.

“All the police have to do is watch that checkpoint,” one man told me, referring to government forces residents say are made up of Shiite militiamen.

The end of the film meanders a bit, with footage of Sunni militant attacks in Najaf and reference to the fighting in Fallujah and Najaf in 2004. This seems like a poor attempt to connect the group of interviewees to the following three years, in which the resistance grew and splintered. Some engaged with Shiite militias and and a few began working with the U.S. military. But in looking at the initial causes of the resistance, which this film does quite well, it’s not hard to think of a U.S. military exit as an imminent reality — life in Baghdad has become much worse since those Bingham and Connors interviewed formed their first impressions of the occupation.

Along with Meeting Resistance, I suggest viewing Michael Tucker’s Gunner Palace, which captures U.S. troops in the neighborhood at the same time.

David Enders covered Iraq for Free Speech Radio News from 2003-2007 and is the author of Baghdad Bulletin: Dispatches on the American Occupation. Meeting Resistance is currently playing at Cinema Village.