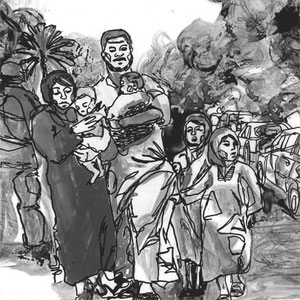 DAMASCUS, Syria — Salam and Hanan’s sixth-month-old son Hamoudi will probably not grow up in Baghdad. He will have lots of company.

Salam* and Hanan are two of the approximately two million Iraqi refugees living in Syria and Jordan. They left Baghdad in June after their house was raided by militiamen because Salam worked as an accountant for the Iraqi government inside the green zone. He decided to take a leave from his job after that, but it seems unlikely he will return. He was also threatened by members of a political party inside the Iraqi government after filing a report that implicated members of the party of embezzlement and corruption.

Their savings are running out, but Hanan and Hamoudi will try and stay in Damascus even if Salam decides to return.

The lights suddenly go out in their small apartment. Damascus now has rolling blackouts, a function of the sprawl that is driven in large part by Iraqis. The hospitals, schools and other infrastructure, in a country that already suffers from problematic unemployment, are being further taxed. Since the U.S. military instituted its “troop surge,” hundreds of thousands of Iraqis have fled their homes.

The United Nations High Commissioner on Refugees (UNHCR) has said its office will try to refer as many as 20,000 Iraqis for resettlement by the end of the year. Some 3,000 have been referred for asylum already. A major part of the problem is the lack of willingness amongst industrialized countries to accept Iraqis, who now make up the largest single group of people seeking asylum in the world. The U.S. took 200 Iraqi asylees last year and says it will take as many as 7,000 in 2007.

As of mid-August, 47 Iraqis had been resettled this year through UNHCR referrals in any country, and progress has been so slow in resettling Iraqis in the U.S. that U.S. ambassador to Iraq, Ryan Crocker, sent a message to the State Department earlier this month sharply criticizing the process.

“Resettlement takes too long,” Crocker wrote, according to The Washington Post. The Department of Homeland Security, which is in charge of interviewing Iraqis for resettlement, has only a handful of officers in Syria to conduct interviews, which UNHCR officials confirmed has slowed the process. By Crocker’s estimation, it would take two years for DHS to interview Iraqis already referred by the U.N. Even that number is a statistical drop in the bucket.

Syria is the last country whose borders are open to Iraqis, and there are approximately 1.5 million of them here. With more than half a million Palestinians in addition to the more recent Iraqi arrivals, Syria has the highest number of refugees per capita of any country in the world. The Syrian government, after meetings with Iraqi officials in Damascus in August, said it would begin requiring visa for Iraqis in the coming months.

Hanan’s brother Bashar left Baghdad to avoid conscription in the Jeish al-Mehdi, the militia nominally loyal to political leader Moqtada al-Sadr that was fighting for control of his neighborhood in southern Baghdad. He spent his last months in Iraq unable to work and mostly in hiding, sometimes at his parents’ house, sometimes at the house of another sister who lived in a safer neighborhood, but the house became crowded as other relatives fled sectarian fighting and cleansing in other parts of the capital. Bashar has been out of Iraq for more than a year. In the last six months he has tried three times to cross into Jordan, where he has been promised a job, but he has been rejected by Jordanian border guards each time. Going back to Iraq is not an option.

“I don’t have any opportunity to change my life,” he said. “I want start my life. It’s frozen.” “The refugee issue has been discussed and the Syrian government said that big numbers of Iraqis create an economic pressure,” said Ali al-Dabagh, a spokesman for al-Maliki who traveled to Syria in August for talks with the Syrian government. “We are aware of this kind of pressure. With the Syrian government calling Iraqi guests and not refugees, the Iraqi government has agreed to take concrete steps towards helping the Syrian economy by supplying the Iraqis with healthcare and education, and humanitarian aid.

Officials from the Syrian government declined comment on the issue.

Most Iraqis in Syria, who initially hoped their stay would last only months, are looking for third countries to emigrate to. Tens of thousands of Iraqis have registered with the U.N. office in Damascus for approximately 11,000 spaces available for resettlement in other countries.
TOO POOR TO FLEE IRAQ

The situation inside Iraq is dire. As the months wear on, many of the more than one million refugees inside the country receive virtually no aid from the Iraqi government. These are the people who lack the money or agency to obtain a passport to leave the country, or could not afford to leave the country if they have a passport. Many have simply been driven from their homes, leaving most of their belongings and having lost their greatest asset.

Sabieh Fayhaa walks half a kilometer to a nearby hose to fill empty bottles and then walks back to the building she squats on the edge of Chikook, a neighborhood in northwest Baghdad that is now home to approximately 650 families who have been driven from their homes in villages and cities around Baghdad by sectarian violence. But her greatest concern is the lack of medical care — she suffers from asthma and one of her daughters has epilepsy. Like many of the children of families that have been displaced, neither of her daughters attends school.

“I have nothing. I’ve lost everything. I have no money to buy medicine.”

The men in Chikook say that despite the increase in U.S. and Iraqi military operations in and around Baghdad since February, it is still too unsafe to try to return to their homes. “Many families tried to return to their neighborhood and they were killed on the way,” says Abu Ahmed from Meda’en, a mostly Shiite village southeast of Baghdad. “My son is in the national guard, and I am too scared to send him back to our village. There are Sunni checkpoints on the road and they will kill any Shiite there.”

Such families are known as mohajereen, Arabic for “the displaced.” Even here, in this mostly Shiite enclave that is controlled by the Jeish Al-Mehdi, the residents say they are not entirely safe, and that the neighborhood is occasionally shelled by guerillas from nearby Sunni neighborhoods, and that drive-by shootings and kidnappings also occur. But most pressing is the lack of services. The offices of Tayyera Sadrieen, the political party allied with the Jeish al-Mehdi, had provided donations of food and cooking gas in the first months, but now supplies and donations have dropped off.

The deputy director of the Iraqi Red Crescent in Baghdad said the Iraqi government and the Red Crescent have fallen short so far in meeting the demand for aid. The UNHCR estimates the number of refugees inside Iraq is increasing at a rate of between 80,000 to 100,000 each month. Some of the same tribes and guerilla groups that drove the families in Chikook from their homes are now working with the U.S. military under what is being termed “reconciliation.”

Hundreds of thousands of Iraqis now find themselves virtually marooned in Jordan. For the moment, most Jordanians take a congenial view toward Iraqis in the country and refer to them as “guests,” despite the burden they pose on Jordan’s already scarce natural resources and the inflation that has come with this refugee influx equal to about 10 percent of the country’s entire population of approximately 7 million. UNHCR offers health care and education to Iraqis in Jordan and is making plans to expand its operation as the number of Iraqis applying for assistance increases. Though UNHCR publications refer to resettlement of Iraqi refugees as the only “durable solution,” it has so far referred fewer than four thousand Iraqis to third countries.

“I think all of us are still hoping that there is movement toward a political solution within Iraq, that these people will have the opportunity to return,” said Imran Khan, the UNHCR representative in Amman.

But many Iraqis in Amman don’t believe that a solution will be reached anytime soon and do not believe they will be returning anytime soon. Twenty-four-year-old Jewad said he fled Baghdad in 2005 after militiamen accused him of selling cars to a rival militia and tortured him. Like many Iraqis in Amman, his Jordanian visa is long expired and he fears deportation. He works illegally, and Iraqis are frequently exploited, especially on construction crews. He chain smokes and breaks down in tears while telling his story.

“I went to the Dutch embassy and no one would let me in. It is expensive to go to these embassies. My rent is $100 dollars a month. I don’t know what to do. We don’t eat lunch sometimes.”

David Enders covered Iraq for Free Speech Radio News from 2003-2007 and is the author of Baghdad Bulletin: Dispatches on the American Occupation.

A longer version of this article originally ran in the St. Louis Post Dispatcher.