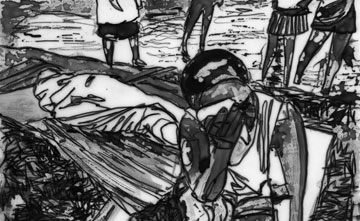 citycinemas.moviefone.com/showtimes
Hurricane Katrina never ended. The flood continues to carry people away from New Orleans, beyond the headlines and past the reach of our sympathy. It left thousands of homeless Americans stranded in cities without the light of a news camera to act as a halo. Once victims drowning on TV, they now stepped off planes, tired and shocked and needing a place to live. As they arrived, sympathy became fear and the same racism that walled them into poverty in New Orleans began to grow around them again.

Desert Bayou, the new documentary by Alex LeMay, sidesteps the easy story of devastation, refusing to add to the stock narrative of disaster tourism. Instead, LeMay packed camera and microphone and went to Utah where 600 evacuees were taken, without choice and now lived surrounded by white people and cold mountains.

The contrast between the promised help and the real suspicion is what gives Desert Bayou its initial drama. Numbed evacuees step on dry ground – and their bags are immediately searched. They are taken to Utah’s Camp Williams military base to live inside gates and under a curfew. Tight-faced residents explain that the measures are for the evacuees’ own good, but under their words runs an electric current of fear.A dramatic high point of the documentary is the district attorney’s charge that many of the evacuees are rapists and murderers. The allegations prove false but he is never held accountable for his statements. The scene eerily reflects the stories of rape and murder that swirled around the Superdome, almost all of which were shown to be hysteria. Desert Bayou catches this contradiction and magnifies it, giving us a foundation narrative about the uneasy aftermath of Hurricane Katrina. The national spasm of shock and grief was read as real American feeling in contrast to apathetic government. Yet as LeMay shows, the institutional racism that paralyzed government response rises to the surface once the evacuees enter our lives as real people with real needs.

LeMay has an obvious love for the two main characters, Curtis Pleasant and Clifford Andrews, allowing them to expose the reality of their broken lives. Clifford has a crack habit. Disappointed, his girlfriend takes their children back to New Orleans and, alone in Utah, he breaks down. It is here that Desert Bayou rises above its genre, giving us a too-brief glimpse into the devastated inner life of a man who has barely survived racism and poverty and flood.

LeMay said he went to Camp Williams without a story to tell but with a story to get. His approach is both a strength and weakness. Desert Bayou has an easy naturalistic rhythm but the film doesn’t come into emotional focus until the end. It does not force a story but waits for Curtis and Clifford to open to the unblinking eye of the camera. When they do, their raw emotions pour down their face and we see how they carry the flood inside them. We also see their limits as men trapped within pain they cannot hold back but which pushes them into the arms of their wives or the drugs on the street.

New Orleans has become a nostalgic symbol of our failure and resurrecting it has become, for some, a mission. But for survivors like Curtis and Clifford, the city was a trap, a sinkhole of poverty and violence. “In five months I got more done in Utah than I did in 5 years in New Orleans,” Clifford said standing in front of his old house. “It’s about them now,” he said, looking at his children. His wife gazed at him with hope and helplessness.

Both Curtis and Clifford chose not to return to New Orleans. As for LeMay, he chose not to force a story or impose judgment but to give the men space to reflect on their lives. Even though I wished for more biographical background and more psychological acuity, it is obvious that Desert Bayou is a necessary film. As it chronicles the aftermath of Hurricane Katrina, it shows the people who are still drowning within its waters and those who have just barely found dry land.