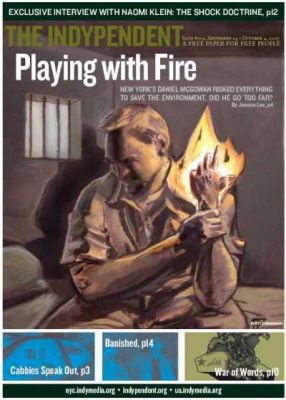 I INVENTED “ECO-TERRORISM”
Responses to “The Birth of a Buzzword: Eco-Terrorism,” Sept. 17.
I coined the term “eco-terrorism” in a 1982 Reason magazine article. Bryan Denson borrowed it late in the game after many other uses. I want the credit and you want to get it right. When you write about me, contact me. It’s a common journalistic courtesy, I answer most questions and I don’t bite. My 1997 book, EcoTerror: The Violent Agenda to Save Nature, was voted into the Random House Reader Survey of the 100 Most Important Books of the 20th Century. Please let your readers know about the REAL birth of the buzzword. —Ron Arnold, Executive Vice-President of the Center for the Defense of Free Enterprise
GOOD GREENS GET A BAD NAME
Responses to “Enemy of the State: The Story of Daniel McGowan,” Sept. 17The ELF is an “eco-terrorist” organization and gives respectable, mainstream environmental groups a bad name. These folks are doing much more harm than good. Why would anyone glorify them? —SDI don’t see how this is glorifying anyone. Also, I’m not sure if you got this, but many people in this particular case were charged with actions that took place six-plus years ago. This article is showing how one person got involved and why/how he is not involved anymore. Calling the ELF a “terrorist” organization is extremely troubling given the associations with that word and what that means to most people, especially in NYC. The thing with mainstream “respectable” environmental groups is that they are barely able to make any sort of headway with(in) this government. What we all need to figure out is what can we do to improve our world that actually gets somewhere, without having to reach the level of desperation that these people have in the past. I don’t think the ELF was able to reach their goals of making a (positive) difference, although I can’t remember the last time I saw any group achieve that. —Sam J
ECO-LEGAL UPDATES
Responses to “The Net Widens: Free Speech on Trial,” September 17.
The jury returned a verdict of guilty in the case of United States v. Eric McDavid. Eric faces 5-20 years in federal prison. His sentencing will be on Dec. 6 at 9 am before Judge England. Please continue to call the jail and request that Eric be given vegan food. Contact info can be found on supporteric.org. Thank you all for your support. The struggle is not over. —SPS

IS PRO-GREEN ANTI-HUMAN?
In response to “Why Green Makes the Right See Red,” September 17.
Green makes the Right see red because, essentially, the Greens of today and the Reds of yesteryear are united by the same basic ethical principle. Unlike Leonardo Da Vinci — one of the perennial fathers of the Enlightenment, civilization, and human happiness who believed that “man is the measure of all things,” Greens and Reds share a different standard.While Greens and Reds may differ in what they would subjugate actual, individual, human happiness and well-being to — in one case Mother Nature and in the other society at large — both groups share a deeply held commitment to subjugation and self sacrifice. That the prevailing criticisms of capitalism have moved from complaints about social injustice or economic inefficiency to frantic pronouncements of the inherent destructiveness of production reveals the true intentions of both Reds and Greens. Just as, underneath all of the pretense to the contrary, socialism was never an attempt at social progress, but a complex jeering of actual social progress, so is environmentalism, at root, a desire not to see the environment flourish, but rather to see humans suffer.
— Grant

FREEDOM IS NOT FREE
Responses to “‘Success’ In Iraq,” September 17.
I want to show my support to the troops in Iraq, Afghanistan and other places of danger. Great job, stay strong! And now I want to show my dissatisfaction with the lack of support to the goal that they are striving to achieve. Maybe I misunderstood something, but they are right when they say that freedom is not free. It has to be won when the time is due. And this is our fight, not only for Iraq, but for our own sake. I disagree with the article; we are not saying enough about how well our heroes are doing on the battlefield and how much more support we need in order to win. Instead, we are telling everybody how little we know about others and how little we know about ourselves. Osama actually pointed out himself these weaknesses. I recommend to follow “teachings” of the enemy of freedom to actually understand why I am so embarrassed reading such articles. —Liberal with a head(response) Liberal with a head: Apart from you thinking that we need more pro-war coverage about the U.S. soldiers, do you want to address the writers’ points about the failure of the war? Or do you believe there have been no failures? Do you believe the U.S. has the right to start wars without international law on its side and with a rationale (weapons of mass destruction) that is patently false? Aren’t you angered by there being no WMDs? Or do you think enough articles about the “good news” that is in Iraq negates no WMDs? —Anonymous

CORRECTIONS
In a photo essay on Guatemala (“Fighting for Justice,” Sept. 17) a photo of Mariano Kalel, a community leader and wellknown Guatemalan activist, was identified as Hector Reyes, a disappeared Guatemalan farmer.

An accompanying picture misidentified women as being members of Reyes’ family; they were, in fact, members of neighboring communities who are unrelated to Reyes.

Another man was incorrectly identified as Don Arturo, a resident of the community of La Paz.