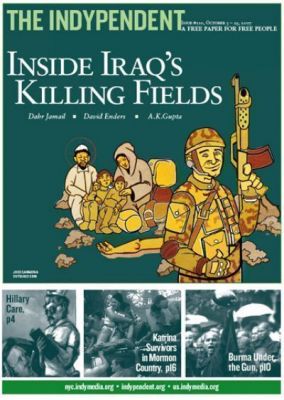 Response to “Ineffective in D.C.,” Oct. 5
From the title of this article I was under the impression that the D.C. march Sept. 21 had somehow failed. I’d say every single march shows just how many people really care — no matter how many show up or what Congress does in reaction. — jpb

Americans are too consumed by entertainment and comfort to demand change. We think that this is good living. Why should we give up our minivans and HD TV s and Monday Night Football and once-a-week cooking lessons? The problem is that although millions of Americans disagree with our increasingly dictatorial government, they won’t rock the boat. They’re not willing to take the huge and irreversible step from protest to action. I don’t know if I am. There’s a lot to give up and it’s difficult to do on your own. When will the American condition be bad enough to inspire radical change. — Agree Completely

Responses to “The ABCs of Counterrecruiting,” Oct. 5

I have been an active duty Marine for the past 10 years, and based on my experience, I can say that your article is completely dishonest. I can respect the fact that you are opposed to the war, but I cannot respect the fact that you are using lies and deceit to harm those who are serving their country and protecting your freedom. You should be ashamed of yourselves. —Ricardo M. Mellot

Response to “Unembedded in Iraq: From Bechtel’s Broken Water Pumps to the Battle of Fallujah,” Oct. 5

Dahr Jamail, thank you for all you have done as one of the very few true reporters of the occupation. I have been blindfolded and sidetracked by both sides of the media empires for so long that I refuse to watch any more television misinformation. … There are around 40,000 deaths by gunfire in the U.S. every year. —cyanfrog

I am very concerned about how the worker’s compensation costs (medical costs for injured workers) will drain the Voluntary Employee Beneficiary Association (VEBA) fund. Typically the employer bears the cost of worker’s compensation insurance or is self-insured and pays the costs directly. However, employers are almost never sympathetic to injured workers and tend to dispute or outright deny company liability for the worker’s medical costs, which then are shifted to the usual healthcare provider (insurance company) and the worker. These costs run into retirement more than the company will want to admit, I’m sure.  How will the United Auto Workers (UAW) cover the costs of what is rightfully a work- related injury and the liability of the company?  Will the worker’s credit rating sink while the UAW also denies payment? Will the VEBA now pay the company’s bills as well? — Kurt Barikmo

I am an employee of General Motors Corporation (GM) and I voted against the contract; it’s unfair and biased. It takes the responsibility out of GM’s hands and puts it in the hands of the union. GM is in trouble because of GM, not the membership. This is a pot they have been stewing for years. — Johney Leake

Responses to “Anti-Abortionists See Sonograms as ‘Windows to the Womb’,” Oct. 5

I work at an abortion clinic and we do ultrasounds to determine length of pregnancy. Most of our patients want to look at the ultrasound and they are actually relieved to know it doesn’t look like much of anything; usually just a sac with a jellybean shape in it is how most of them describe it. So they can try to pass this law and maybe one or two girls will change their minds, but most of the patients that come to our clinic have already made their choice. I think they need to stop wasting the tax payers’ dollars on another useless abortion regulation. They could put all that money toward educating people on safe-sex practices and birth-control methods. People are going to have sex; it’s human nature.

Let’s give them the knowledge to prevent pregnancy and sexually transmitted infections. —Ken

Please print a retraction stating that Dr. Ron Paul does not support using taxpayer money to force ultrasounds on women. He is a constitutionalist and would never support such frivolous spending. While he would encourage doctors to have pregnant patients do this, he would never use taxpayer money to do this. Your article makes it seem as if he is a part of this movement, this is not the case. Dr. Paul wishes for Roe v. Wade to be overturned and for states to have the decision as opposed to the federal government.

He does not support the federal government having anything to do with this decision unless it concerns defining life, which he believes begins at conception. — JEFF

Many libertarian and liber-anarcos are singing Ron Paul’s praises but he gives me pause. Whenever antiracist groups show up at anti-immigration rallies (the New Jersey ones come to mind), openly neo-Nazi groups and the angry white guy crowd are Paul’s biggest supporters… Not to mention that Paul, as Bader points out, is virulently anti-choice. — Anonymous

CORRECTIONS:
The final line of Eleanor J. Bader’s article (“Anti-abortionists See Sonograms As Windows to the Womb”) in the Oct. 5 The Indypendent was cut off. The complete final sentence should have read, “Time will tell whether the law will opt to treat women as capable decision makers or, like Ron Paul and Richard Land, will treat them like children in need of protection, mindless souls who know not what they do .”

A photo from Jena, Louisiana, that appeared on Page 3 of the Oct. 5 The Indypendent should have been credited to Araby Smyth.