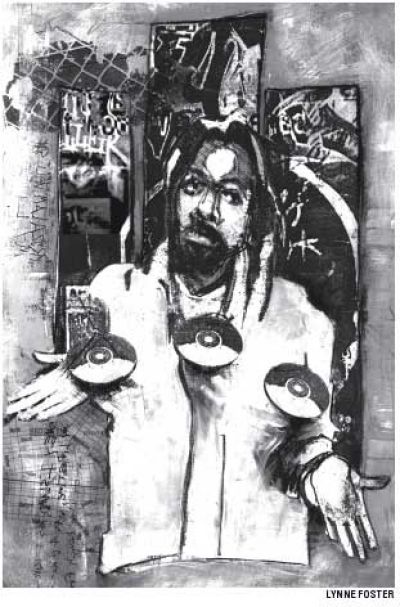 Born in Trinidad, reggae singer Khari Kill is now a proud Brooklynite. The back cover of his Picture of Selassie album (Outta “D” Ghetto/ Raptivism) depicts him in front of a Rogers Avenue bodega, and the disc’s release was heralded by posters lining Church Avenue. He’s touted as having “restored New York as a powerhouse in conscious reggae music.”

That’s an audacious claim, and a few cuts on the album live up to it. The standout is “Mary Grandson,” about a ghetto youth selling ganja to support his grandmother who gets killed by police. With ticking bongo echoes and the bassline dropping in and out to heighten the drama, Khari Kill singjays with chant-downon-Babylon fervor. “Dem a legal murderer/Who a charge ‘em fe murder?/Me talking about the police and the soldier.” He gets a similar flow going on “Jesus” and “Top Ranking” — which rhymes with “go to school and don’t do the dumb thing.” Even on the lesser tracks, the full, pulsing bass and chinking, echoed-out guitar would make this a pleasing, uplifting headphone soundtrack for a sunny-day stroll down Nostrand Avenue.

Over 15 tracks, however, it gets repetitive. The problem is that roots reggae, like rock, blues, and country, has a formula that’s so well established that it’s extremely difficult to avoid clichés — what can you do that Bob Marley didn’t do 35 years ago? Khari Kill says “Selassie” almost as many times as Al Pacino said “fuck” in Scarface; the lyrics often recycle standard reggae lines such as “the battle is getting hotter,” and the ganja paeans include the pothead T-shirt slogan “smoke and fly, don’t drink and drive.” I can understand the Rastafarian veneration of Haile Selassie — the first black head of state of the 20th century — as an I-am-somebody riff; “we were kings and queens in Africa” is certainly healthier than the self-hating nigga-nigga-nigga barrage that permeates much of hip-hop. But as Pam Africa of MOVE told a militant R&B singer I know, she didn’t want to be called a “queen” because, “if you have a queen, other people have to be subjects.”

Overall, Picture of Selassie is the kind of album where I’m glad that downloading has emerged as a neo-45 form; there are a few cuts definitely worth having on it. And you might want to check out his soca-flavored material that isn’t on the album.

If Khari Kill is music for Brooklyn Rastafarians, then Rising Appalachia’s Scale Down (UnWound Records) might be music for dreadlocked white people in Asheville, North Carolina. It’s spacy, medium-slow rhythmic acoustica, reedy female harmonies over ragaesque banjo picking and low djimbe thumps. I like the texture and mood a lot, but they don’t vary very much. Though the album is occasionally leavened by an Irish-lament fiddle or a ragtimey-blues or churchy feel, over 60 minutes it gets samey. The most memorable melodies are on the traditional material, most notably a remake of “Give Me That Old-Time Religion” as “Old Fashioned Morphine.”