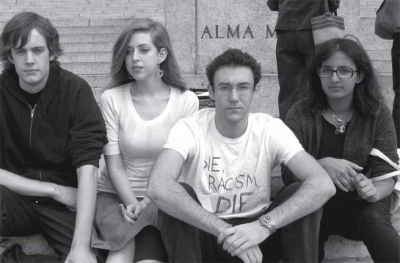 First they came for the Palestinian professors. Then the Minutemen arrived on campus, gunning for the immigrants. In early October, someone hung a noose from the door of a black professor’s office. Following the slew of racial attacks at their university, a coalition of Columbia students banded together to pre-empt the latest offensive, which the right dubbed “Islamo-Fascism Awareness Week.”

“We’re just a group of concerned students feeling equally angry, frustrated and tired of what’s going on,” explained Keondra Prier, a senior at Barnard and a member of Students Promoting Empowerment and Knowledge (SPE aK). “Certain people are tolerated on the campus while certain people are not. And it’s very evident as to who is and who’s not, and why.”

Set to take place on dozens of campuses across the country from Oct. 22-26, Islamo-Fascism Awareness Week (IFAW) was hyped in advance as, “the biggest conservative campus protest ever … a wake-up call for Americans,” according to the Terrorism Awareness Project, which is sponsoring IFAW together with the Young America’s Foundation. Between them, the sponsors have ample funds in their war chest for such occasions.

The week was to feature petitions denouncing “Islamo-Fascist jihad,” pamphlets like “The Islamic Mein Kampf,” plus purported “teach-ins” and “sit-ins” at Women’s Studies Departments, and speeches by the likes of David Horowitz, Ann Coulter, Rick Santorum and Daniel Pipes. The event’s sponsors urged their followers: “If you want to help our brave troops who are fighting the Islamo-Fascists abroad — bring Islamo-Fascism Awareness Week to your campus.” “NOT ON OUR CAMP US,” countered flyers circulated by the hundreds from Columbia’s Intercultural Resource Center, as students prepared to counter Horowitz’s planned Oct. 26 visit to Columbia. Many here saw Horowitz’s visit as an insult and an injury to a campus community still reeling from a noose hanging, racist graffiti and other racial incidents this semester.

“What it does,” said Noah Baron of Columbia Students for a Democratic Society (SDS), “is it builds on people’s fears … And it makes it more difficult to discuss things that are already difficult to discuss … racism, anti-Semitism, homophobia, Islamophobia and things like that.”
Many students at Columbia did not buy the rhetoric of “Islamo-Fascism” in the first place the term only gained currency after President Bush picked it up as a mantra in 2006. Rahel Aima of Columbia SDS sees it as a fiction: “Islamo-Fascism is constructed … [They say,] ‘We don’t like Islam, we think fascism is bad, let’s put them together’ … And they’re like, ‘If you’re not with us, you’re fascists.’”
This is not the first showdown of its kind at Columbia. For years, the university, its faculty and its students have been targets of a relentless campaign driven by those close to Horowitz, an ex-leftist-goneright (See sidebar).

The Department of Middle East and Asian Languages and Culture (ME ALAC) came under siege in 2005 for its pro-Palestinian professors. Horowitz, calling the university a “national scandal,” cooked up a blacklist of “dangerous” faculty. In 2006, the media villified student activists after they confronted the Minutemen on campus. And then there was the furor this fall around the Sept. 24 visit by Iranian President Mahmoud Ahmadinejad.

With IFAW, Horowitz took on two of his favorite enemies: left-wing faculty and Muslim youth. In a recent statement, he claimed that “the progressive left is the enabler and abettor of the terrorist jihad,” and in the same document, he called the Muslim Students Association (MSA) a “front for the Muslim Brotherhood and Hamas.”

Nationwide, Muslim students and other advocates launched a rapid response to IFAW and the Horowitz offensive. The MSA announced a “Peace Not Prejudice Campaign.” As national organizer Asma Rehman put it, “The MSA is trying to reclaim the discourse from the hands of intolerant extremists who smear and distort Islam to further their own racist agendas.”

In addition to distributing flyers and organizing for a massive counter-protest against Horowitz, students at Columbia wore green armbands and T-shirts proclaiming, “Peace Not Prejudice,” and spread the message on online petitions, email lists and Facebook. Ibrahim Ramey, Human and Civil Rights Director for the Muslim American Society, added that, in his view, countering IFAW is also about countering, “the longer-term political agenda of Horowitz and company to further consolidate American state power, military power and transnational capital at the expense of real democracy and social justice.”

As IFAW approached, many students still found themselves wrestling with how best to respond to the right’s offensive. “While we don’t want all our actions to be reactions,” said Barnard student Aretha Troy at a coalition meeting, “there’s things that need immediate mobilization by the entire student body. There should be immediate solidarity where and when we need it.” Everyone in the room was nodding their heads. 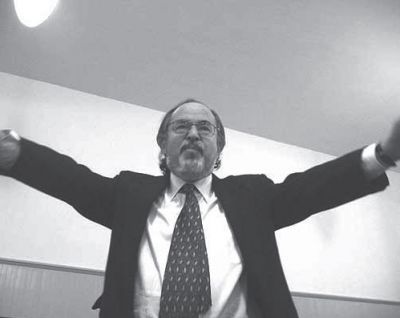 ONCE A LEFTIST, DAVID HOROWITZ NOW PLAYS FOR THE OTHER TEAM

A New York City-born red-diaper baby and anti-Vietnam War activist, David Horowitz embodies the incoherent extremism often unfairly attributed to other once-radical baby boomers. “Islamo-fascists,” and their alleged supporters in the academy, are only his latest target.

Beginning in the mid-1980s, Horowitz launched numerous salvos in support of his signature cause: destroying what he calls the left-wing “stranglehold” on U.S. higher education. Although a vitriolic opponent of affirmative action, he has advocated the political “re-balancing” of academia to better reflect the perceived ideological makeup of the country. The Southern Poverty Law Center has summarized the mission of Horowitz’s Center for the Study of Popular Culture as, “mak[ing] bigoted and discredited ideas respectable.”
—C.A.