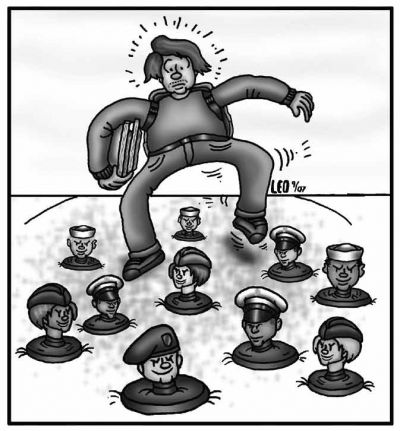 For the past five years, large marches and rallies have been a semi-annual staple of the antiwar movement. Tens of thousands of people parade to little effect through the empty streets of Washington, D.C. on Saturday afternoons, holding aloft signs declaring that the Iraq War is wrong. But what would happen if large numbers of people — the same people who care enough to come out for these marches or to vote against warmongering politicians — began directly challenging the Pentagon’s constant need for fresh supplies of troops in their own communities?

In Army of None, Aimee Allison and David Solnit provide a handy how-to manual for just such a movement. Allison, a conscientious objector from the first Gulf War, and Solnit, a longtime socialjustice organizer, initially take to heart Sun Tze’s ancient advice. (“Know thy enemy, know thyself. A thousand battles, a thousand victories.”) They lead the reader first on a quick, but comprehensive, tour of the slick psychology and tactics of military recruiters and then provide an array of smart tips and talking points for counterrecruiters. Counter-recruiters have had some success in recent years, and the personal accounts of young people and other grassroots organizers also sparkle throughout the book.

However, because of its practical, can-do bent, Army of None does not fully grapple with the scale of the challenge faced by counter-recruiters or specify what is needed to rise to the occasion. The military has a $4 billion annual recruiting budget, thousands of salesmen/recruiters working 16 hours per day, sophisticated datagathering operations and nearly unlimited access to many target schools. The war is a drag on their work, but the recruiter’s job is not to convince every young person to be thrilled about the military; it is to identify those youth who are “propensed” to join the military and then reel them in with whatever mix of deceit and fantasy does the job.

For the counter-recruiting movement to make a serious dent in the military’s recruiting efforts, it would need far more resources and committed organizers on the ground building youth-led, grassroots networks that would reach deep into the schools and other community institutions. This would need to happen not just in big cities or liberal college towns (which provide most of the success stories in the book), but in the small, forgotten towns in the interior of the country that are steeped in pro-military culture and provide a disproportionate number of the troops. While this may seem implausible, these are exactly the parts of the country that have been the most betrayed by the Bush administration and the war and to which countless disillusioned soldiers are returning.

In the last section of Army of None, the authors take a step back to examine the big picture and call for the antiwar movement to adopt a “strategic framework” that moves away from random protests to a concerted, yet decentralized attack on key institutional pillars that make the war machine run smoothly — recruiting, the mainstream media and corporations like Halliburton. These ideas, long and loudly championed by Solnit, sound great on paper and are an improvement on the myopia of leading antiwar coalitions like United for Peace and Justice, ANSWER and the Troops Out Now Coalition.

Still, as long as most dissenters in this country remain content to limit themselves to ritual forms of activism that prioritize self-expression and asserting one’s own moral rectitude, it will be difficult for the patient, day-to-day antiwar organizing envisioned by the authors to take root. But their book is a valuable guide for those ready to try.

Authors Aimee Allison and David Solnit will read from Army of None Fri. Oct. 12, 7pm, at Bluestockings, 172 Allen St.