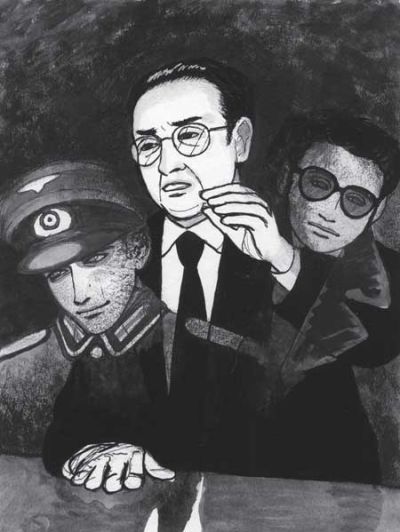 Once asked whether he would defend Hitler, Jacques Vergès said, “I would even defend George Bush — if he pleaded guilty.”

Vergès defended Nazi Klaus Barbie, “the Butcher of Lyon,” in 1987, and proposed to defend Saddam Hussein in 2003. Now 82, and widely regarded by his peers as one of the foremost criminal lawyers of all time, Vergès is the subject of a new documentary by Barbet Schroeder.

Since his 1969 film More, Schroeder has filmed Ugandan dictator Idi Amin Dada and writer Charles Bukowski, driven by his sustained interest in “monsters.” Vergès is one of them: a flamboyant and enigmatic figure, famous for his defense of the indefensible.

“[Vergès] became a lawyer by accident,” says Lionel Duroy, a journalist for Libération who investigated Vergès during the Klaus Barbie trial. After taking part in the Resistance during World War II, Vergès was appointed to defend an Algerian female bomber (like in Pontecorvo’s film, The Battle of Algiers). “I understand the Algerians’ struggle, and I do not condemn their violence,” he said. Vergès called on international help to save his client, Djamila Bouhired, who became the face of the Algerian Revolution. Had she been executed, he would have shot somebody, Vergès said. Instead, she was pardoned, and he married her.

The outspoken young Communist lawyer became known for his eccentric methods. Insulting judges, singing and waving flags, Vergès developed a dramatic persona. The son of a French father and Vietnamese mother, he was “born angry, born colonized.” Vergès used the court of justice as a tribunal and a stage to expose his anger.

Considering “[today’s] Palestinian is yesterday’s Algerian,” in 1968 and 1969 he defended the Palestinian fedayeen responsible for two El Al Israel Airlines attacks — and became the superhero for the cause of the oppressed. Vergès has said that for him, an acquittal is not the goal — rather, the goal is to expose the colonial crimes of Western nations.

Vergès’ full biography remains a mystery — he went missing between 1970 and 1978, during which time, rumors suggest, he joined Pol Pot in Cambodia, went to Vietnam, or acted as a secret agent for the French government. Schroeder’s rigorous investigation reveals Vergès’ involvement with Congolese dictator Moïse Tschombé. Vergès’ prolonged absence coincides with the emergence of Waddi Haddad’s international terrorist network, financed in part by a former Swiss Nazi, François Genoux, who supported the National Liberation Front in Algeria and Palestinian resistance movements, and is a close acquaintance of Vergès.

“Vergès’ trajectory grew ever more incomprehensible to me,” says the director, “but I always dreamt of knowing more about this character, whom I viewed also as a perverse and decadent aesthete.” Using archive footage and extensive interviews with the lawyer, his entourage and several former terrorists, Schroeder does a fine job at rendering the complexity and the many facets of Vergès’ personality — that of a refined provocateur and great storyteller who loves the spotlight. Although Schroeder conceived it entirely like a work of fiction, the film is still both stimulating and destabilizing, neither denouncing nor endorsing the disturbing character it portrays.

Lionel Duroy says, “[Vergès] should have or could have been a terrorist.” In fact, the film reveals his ties with the Popular Front for the Liberation of Palestine — financed German terrorist “Carlos The Jackal.”

Ultimately, Vergès’ opacity could have jeopardized the film, the way an unfinished puzzle only answers part of the central question: Why does Vergès do what he does, systematically? It is clear from the beginning that his posture denounces both the establishment and the illusion of moral comfort given by the (necessary) trials of terrorists. However, his initial post-colonial stance wears thin. Little by little, we find out Vergès lost faith in political models. Resistance as a motif became sufficient. In the end, his unconditional support for all activity classified as terrorism justifies his nebulous involvement with Holocaust denialists and dictators of all kinds.

“What thrilled me most,” says Schroeder, “was the opportunity, through Vergès, to make a film about contemporary history, about our experience of the last 50 years.” Also the story of world terrorism told through this film, by one man who connects the dots, makes it a breathtaking thriller indeed.

Schroeder confirms that the last time he and Vergès met after the film was made, the infamous lawyer hadn’t lost his cynicism: “[Vergès] says that I am treacherous and he is my victim.”