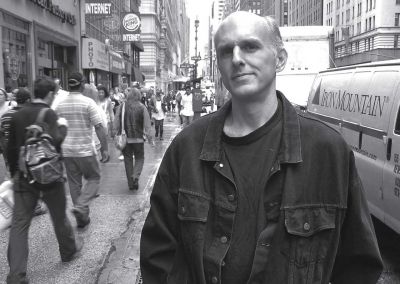 I am a war tax resister. I refuse to pay at least some of my federal taxes. Why? Because after years of examining the way things are, I can only conclude that it would be immoral and unethical to willingly pay taxes to the U.S. government, which spends billions every year on military campaigns in Iraq, Afghanistan and countries around the world.I didn’t always feel that way. My parents were Nixon supporters (my father was a fan of Barry Goldwater), and I grew up in lily-white middle-class Hillsdale, in Bergen County, N.J. I wasn’t exactly a rebellious kid. I was raised to believe in the rightness and goodness of America, and I sure believed it. I hated the commies, and those hippy war protesters who were ruining America (I was born in 1958, so I grew up during the Vietnam era, but was young enough to miss the war). I was well prepared to be a patriotic American, but something happened — I grew up.

When the wars started, first in Afghanistan, then in Iraq, I went to antiwar marches, including the February 15, 2003, march, in which hundreds of thousands of New Yorkers protested the war. While I got a good feeling from some of them, I knew deep down that marches, particularly legal, permitted weekend marches, do nothing to impede the machinery of war. It was at one of these early antiwar marches that I received a flyer about war tax resistance from someone from the National War Tax Resistance Coordinating Committee (NWTRC ), an organization that provides information to those considering war tax resistance. It really got me thinking seriously about my taxes, which were going to fund these wars.

Although I first started considering tax resistance in 2003, I didn’t take any immediate action. I’m basically a law-abiding person who doesn’t want a lot of headaches — and tax resistance sounded like a major headache. But I also kept reading about the war. Finally, in 2005, instead of sending a check to the IRS, I sent a note explaining that I cannot send them money knowing what the money would be used for.

I send the amounts I owe to groups involved in more constructive pursuits. I have found that most war tax resisters that I have spoken with do the same, as they do not object to paying taxes as their share of the expenses in running society — it is paying for war we object to. Thus it’s not that we’re not paying taxes — what we are doing is diverting our taxes.

Now I’ll be the first to admit that my resistance is pretty token. Most of the taxes I “owe” are paid through withholding. I just refuse to send the balance (about $100-$200/year). But, token or not, being a war tax resister is stressful. I get letters on a fairly regular basis from the IRS demanding payment, which really takes the fun out of checking my mail.

When I started this I figured the IRS would levy the amount they said I “owed,” including penalties and interest, out of my bank account; this is what happened to other resisters I had consulted on this matter. So far, after three years, this hasn’t happened yet, which means that small amount of money hasn’t gone toward buying more bombs and bullets.

But, some people ask, so what? When the government does decide to levy the amount I owe, they will get the money anyway, more after penalties and interest are added. I have certainly thought of this argument, and wrestled with it.

What it comes down to in the end is, that I want to be able to say if only for my own edification, is that I did not willingly act to further the execution of these wars.

If the government withholds my taxes, if they take my money out of my bank account, it is very difficult for me to stop them; but then the onus is on them; I will not have voluntarily assisted them.
For more information about war tax resistance, see nwtrcc.org.
PHOTO: To protest the billions of dollars spent annually on the wars in Iraq and
Afghanistan, Hoboken resident Eric Volpe decided to stop paying federal
taxes two years ago. As a war tax resister, Volpe, a former Amtrak
employee who is now a rail operations analyst, faces fines and the ire
of the IRS. Photo: K. Cyr