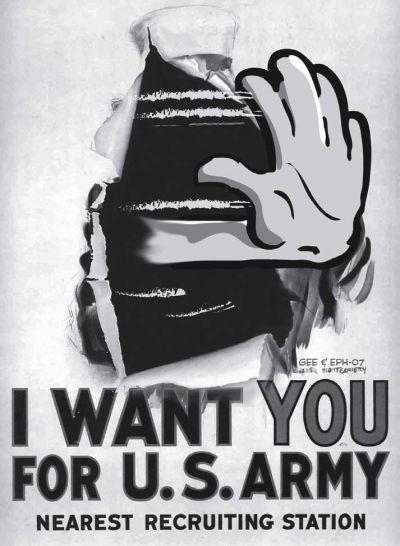 The refrain was an homage to members of Black Veterans for Social Justice, who had spoken with the high schoolers earlier in the year, and a powerful introduction to a series of vignettes performed that day by the students about race, the draft and military recruitment.

“They [military recruiters] don’t tell you that you’ll get PTSD (Post-Traumatic Stress Disorder) or your leg blown off or that you could die,” said Tabitha Cadet, a 17-year-old student at Paul Robeson High School and a member of the theater troupe.

The students’ performance kicked off an intergenerational counter-recruiting event organized by Prospect Lefferts Voices for Peace and Justice, a group founded in 2001 by community members in my Brooklyn neighborhood. We organize these forums to arm people in our community with firsthand stories from veterans and knowledge to help inform their perspectives on joining the military.

I got involved in the group more than a year ago because I was tired of marching in the streets without seeing any changes. I have a cousin in the military and knew that if anything happened to him and I didn’t do everything I could to stop the war I would always regret it. Now, using counter-recruitment, I try to do what I can to directly disrupt the war machine by stopping young people from joining the military.

Our group speaks in high school classrooms, PTA meetings and career fairs, talking with students and parents about the “other” military that recruiters don’t tell them about. To students thinking of joining the military, we offer alternative ways to get financial aid for college, and find job training and apprenticeship programs. Whenever they can, veterans including members of Veterans for Peace or Iraq Veterans Against the War (IVAW) accompany us to speak firsthand about their experiences of the military and war. “A two-year-old girl got shot in the leg and she didn’t cry. She just looked at me like she was asking, ‘Why is this happening to me?’” said IVAW member Mike Harmon during the Oct. 13 forum. “I answered out loud, ‘I don’t know why.’” Harmon, 25, is a native Brooklynite who served in Iraq from April 2003 to the end of April 2004.

When asked by a community member whether his experience in the Army caused emotional problems, Harmon admitted to becoming addicted to drugs and alcohol after his tour of duty and revealed that he is currently on five different medications. He said he often goes into “funks,” but that the work he does speaking out against joining the military gets him out of “funks a lot quicker.”

One reason we organize forums is to initiate a dialogue in our community, which is overwhelmingly against the war, and to continue to motivate folks to take action, whether it be in the classroom, in a forum or in the streets. But for me, the most important aspect is allowing young people and parents to see what people just like them are doing to stop the war.

During the question-and-answer session, Rodney Agnant, a 14-year-old student from Brooklyn Technical High School, said he notices that a lot of commercials for the Army are shown during television shows geared toward teens and asked whether Harmon thought the Army was intentionally targeting young teenagers. Harmon agreed that the military is targeting young people through TV and video games. Afterward, Agnant said that Harmon helped him “see more clearly all the subconscious ways the Army tries to get you to join.”

“You have the impression that the military is a good group, but that’s not always true,” Angelica Ahmed, a 14-year-old student at Brooklyn Technichal High School, told me after the forum. “The recruiters promise lots of things but it’s not what you thought.”

A CHANCE TO STEER A STUDENT AWAY FROM WAR
You do not need a lot of people to do counter-recruitment. There are many ways you can get involved as an ordinary citizen, student, parent or teacher. You can reach out to a teacher at the local high school or bring a guidance counselor some information on alternatives to the military for the guidance office. If you want to work in group, contact a group that is already involved in counter-recruitment in the city. If you are a teacher or parent, the New York Collective of Radical Educators has a high school curriculum to complement the great counter-recruitment film, Military Myths, produced by Paper Tiger Television.

For more information about Prospect Lefferts Voices for Peace and Justice contact: prospectforpeace@verizon.net.