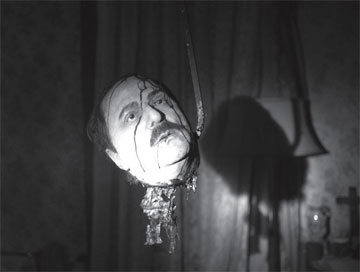 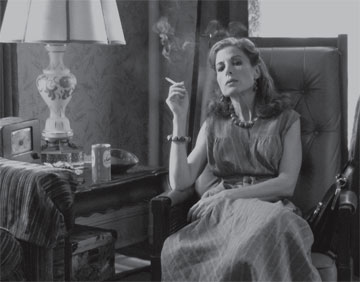 Cold, sporadic rain didn’t deter ardent fans from making the pilgrimage to NYU for the sixth annual New York City Horror Film Festival. The five-day extravaganza, like a Mexican Day of the Dead celebration in celluloid, brimmed with as many laughs as gasps. Festival directors Michael Hein and Anthony Pepe selected excellent films that showed the breadth of an often pigeonholed genre. A broad range of works from Australia, California, Germany, Indonesia and New York drew as diverse a crowd of supporters.

Standout films included Richard Gale’s crowd-pleasing Criticized (which won the award for best short), a black comedy about an unhinged filmmaker who abducts and tortures a prominent critic who trashed his film. A period piece set in Texas, Chickenfüt is a funny and touching short about the torment of a German exchange student who gets revenge on his bullies; his fate spawns an urban legend. Matthew Byrne directed the eerie and pensive Southern gothic tale The Wake. The mostly pantomimed film follows a middle-aged woman who binds a boy, hangs a cabbage above his face, and starves him. Quiet and revealing, the story plunges into a surreal ending. The Fifth is a tightly written and acted absurd comedy about five suburban men gathering for their regular poker game, which is annoyingly interrupted by one man’s job as a serial killer. The claustrophobic short Of Darkness, by Gary Irwin, is a modern Lovecraftian tale about a group of suburban boys who unlock an incomprehensible evil contained within an ancient book.

Infamous hack filmmaker Uwe Boll redeemed himself with his brutally graphic Canadian feature Seed. A vicious serial killer unleashes a Michael Myers-like reign of terror and murder in a small town, seeking revenge on the authorities who tried to kill him. Jack Ketchum’s novel, based on a true story, serves as the basis for the horrific The Girl Next Door. The Greg Wilson-directed feature stunned the audience with its portrayal of 1960s suburban youngsters who, at the behest of the sadistic Aunt Ruth, spend a summer torturing a 16-yearold city girl. Frank Zagarino’s gory Blood Rails won over the audience, reminiscent of the it’s-so-bad-it’s-good feel of Evil Dead 2 and filled with convincing special effects. The featurelength story of jilted love and an albino’s teen-murdering rampage with rail spikes ended the celebration.

Subversion, including criticism of corporations (Alien), anticonsumerism (Dawn of the Dead), empowered women (A Nightmare on Elm Street) and anti-fascism (The Devil’s Backbone), is a pervasive element in the horror genre.

Horror has a rich history of delving into social taboos that almost no other genre of film does as overtly or consistently. Along with staples like the fear of the metaphysical unknown (Halfway, Death of a Ghost Hunter), the New York City Horror Film Festival’s films revealed more topical fears. The heinous truth that lies below the fragile and pleasant façade of decency and normalcy (The Killer, The Evil Inside, Take Out, The Girl Next Door) made strong impacts on the audience. Some films expressed the dread that we harbor of the socially oppressed (women in Alone, prostitutes in Winter’s Warmth). Abduction from our normal lives — a relevant theme especially after 9/11 and popularized by Saw — was also evident in the fest (Halfway, Stink Meat, Crimson Robe).

Numerous films pointed to a fear of waning morality (The Fifth, Sheepskin, The Strain), especially in the face of rising consumerism (Foet, Hostel). Many horror films are modern fairy tales, serving as a moral compass, complete with fairy tales’ traditional use of brutality. As Stephen Prince wrote in his book The Horror Film, “Like other genre movies, any given horror film will convey … ideological and social messages that are part of a certain period or historical moment.” But the continued success of now-classic films (Psycho, The Exorcist) shows us that some horror is perennial, reflecting unresolved dread. Moving from distant locales and monsters (Dracula, Frankenstein and King Kong) to more domestic terrors (Rabid, Scream) the genre seems to parallel America’s growing uncertainty with itself.

Considering the current climate of preemptive war, rampant capitalism and religious fundamentalism, which challenge our notions of stability and safety, the conditions are ripe for the growing creation and appeal of horror.