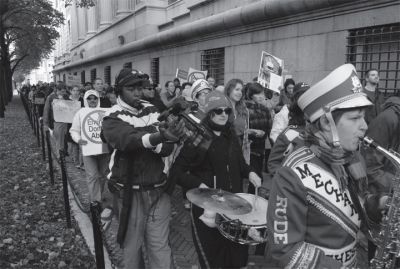 Residents of West Harlem were joined by the Student Coalition on Expansion and Gentrification Nov. 10 to protest Columbia University’s plan to expand into the nearby neighborhood.  The rally began with remarks from members of Develop Don’t Destroy Brooklyn, the Mirabal Sisters and the Harlem Tenants Council, who all face threats of losing their homes. Brooklyn’s Rude Mechanical Orchestra led more than 80 protesters across campus to the front steps of Columbia President Lee Bollinger’s residence where the crowd cheered,“Harlem is not for sale!”