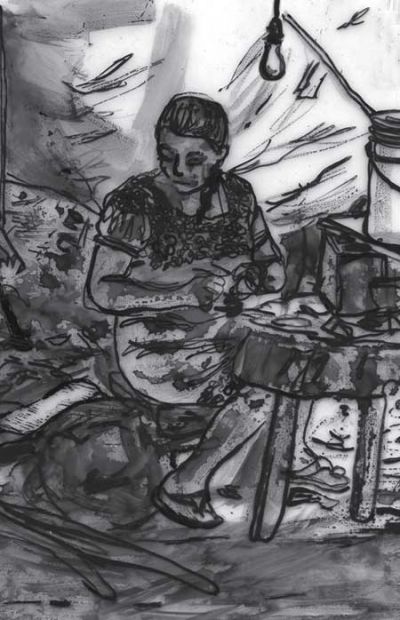 BENEMERITO , MEXICO —How much do you pay for electricity every month? $50? $70? Maybe $100 or more if you have a huge refrigerator or use a lot of air conditioning in the summer? How much do you think a family living in a wooden hut in the jungle in Chiapas should pay? The Mexican federal government thinks they should be handing over between $100 to $400 per month.

On Oct. 14, about 150 representatives from 14 collectively-organized farming communities (known as “ejidos”) in Mexico’s southernmost state of Chiapas packed a warehouse in this town near the Guatemalan border to discuss soaring electric rates and alleged price-gouging by the government-run Federal Electric Commission (CFE).

Previously, these community members paid about 18 to 20 pesos a month (or about $2), which corresponds to their rate of consumption. Most of them live in small one or two-room wood huts with roofs made of straw or sheet metal. Their electricity consists of one or two light bulbs hanging in the middle of the room. Additionally families may have a television and/or a radio. Since 2005, electric bills have been increasing.

At the meeting, copies of bills were posted on the wall. One bill showed that the customer’s electricity usage had mysteriously quadrupled and the monthly charge had increased to 1,523 pesos (about $150). One recent news article recently claimed that bills have reached as high as $479.

Several community members stood up and related similar stories of their electric bills skyrocketing to unimaginable sums. They explained that they couldn’t afford these prices, and that there was no way they had consumed so much electricity.

Guillermo Solis of the Red de Defensores Comunitarios (Community Defenders Network), which is helping the 14 ejidos organize against the rate hikes, said his organization is coordinating with other groups statewide to respond to the problem. This way they will have more strength in numbers and be able to fight the system. He also explained that the scope of this problem is wider than just electricity; that their access to water, land and housing is also threatened (see sidebar).

The community members discussed various things they could do to address this problem. Solis suggested recruiting specialists such as lawyers and sociologists to investigate the situation. He also proposed that people engage in acts of nonviolent resistance like collectively refusing to pay bills until they reflect fair prices.

According to Solis, there are groups that give workshops to rate-hike resisters on how to connect and manage electricity should the government cut them off the grid for non-payment.

Augustín Soza Canseco, president of the neighboring municipality of Marqúez de Comillas, also attended the meeting. He supported studying the situation while stressing the importance of remaining “objective.” He opposed engaging in resistance, however, saying there are other options, like negotiating with the government and turning to foreign resources, during which he gestured toward me, the only foreigner in the room.

Various women and men stood up and responded to him, complaining that their bills were too high, and asking what they were supposed to do in the meantime with these bills they cannot afford. Some community members suggested agreeing to a fixed monthly price for electricity, of about $2-5 but that $50 was too much.

Soza became visibly exasperated, and stated that he did not think that $50 was too much to charge for one month. “We are doing a business here,” he said. At this point I wondered how much Soza’s monthly salary was. Surely it wasn’t the $4-a-day minimum wage that many of the audience members are probably making.

Finally a committee was democratically elected, and a rough plan was made to gather receipts and copies of bills from various community members as evidence of what was happening. From there they will decide the next step.

In the United States, it is vital that we understand why so many immigrants are fleeing from Mexico to our country, where they make more than half of the nation’s 12 million undocumented immigrants.

The battle over soaring electric rates in Benemerito is only a small piece of the reality that Mexico’s 25 million rural inhabitants are facing. While they struggle against neglect and government corruption, one of their most important sources of income is remittances from family members living and working in the United States.

If people want to do something about the growing number of undocumented immigrants entering the United States, they should be angry with the Mexican government, the U.S. government, which has fully supported Mexico’s misguided freemarket policies, and the transnational corporations that have profited so handsomely from this situation.

That anger should be directed toward changing foreign and economic policy, not toward immigrants who are the first victims of a corrupt system.