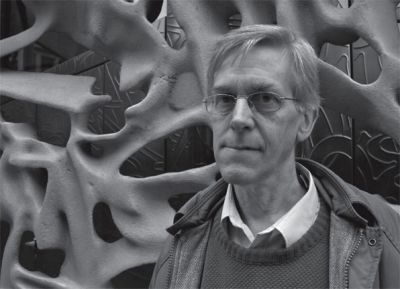 The face behind the email: New York activist David Wilson leads the effort to compile a list of events for the Activist Calendar, an online comprehensive resource for progressive and cultural happenings in the city, which is emailed out weekly. Sign up at nycalendar.org. photo : K. CYR

By Alex Kane
From upcoming pickets by striking workers, and rallies for universal health care or affordable housing to freegan workshops and announcements about progressive film showings, readings, or good old antiwar protests, the New York City Activist and Protest Calendars have become indispensable resources for many in New York’s progressive circles.

Both calendars provide some of the only near-comprehensive coverage of New York’s upcoming progressive events. “I think the government and various opponents go through a great deal of effort to make sure we are divided and at each other’s throats, and it’s probably in the best interest of people to counteract that. The calendar is one way to do that,” said Todd Eaton, who moderates the Protest Calendar and hopes the calendar helps create a “cross-factional, multi-issue place where people have the option of taking a look at what other groups are doing.”

While the two online listservs have become a mainstay for many activists, the calendars are put together without much fanfare by only a handful of dedicated volunteers. “It’s all a hobby from my Brooklyn home on a cheap desktop PC with 26Kb dialup internet,” said Eaton. “I’ve accepted maybe $20 in donations over the last few years from one nonstranger benefactor, but have no income or fundraising.”

David Wilson, who has worked with the Nicaragua Solidarity Network since 1987, heads up the task of putting together the weekly Activist Calendar. According to Wilson, the calendar came out of discussions with peace and Latin American solidarity groups, who were scheduling conflicting events on the same topic. In response, Wilson helped get out the first incarnation of the calendar during the first Persian Gulf War in 1991. In the preinternet age, the calendar was disseminated via phone messages. “After the first couple of weeks it turned into a five-minute tape,” said Wilson.

Four years later, today’s online version of the calendar was created. The information for the different events, such as rallies, protests or talks, comes from people sending them directly to the calendar or from subscriptions to online listservs.

Compiling the calendar can be a difficult task with few volunteers and many events. Four volunteers are responsible for adding an average of 50 new items to the calendar a week. “We try to give priority to events from the underrepresented communities,” said Wilson. “But with our limited finances and a limited number of volunteers, we have to rely on help from the activist community to do this — by activists passing on events from the underrepresented communities, spreading the word about the calendar and encouraging people to send their events.” However, the good news is that compared to several years ago, traffic to both listservs has increased significantly.