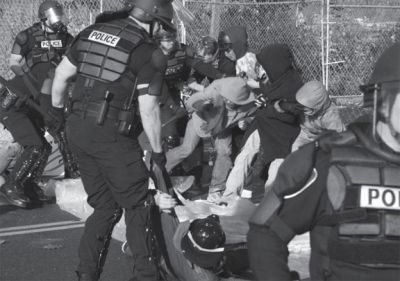 For the third time in two years, dozens of members of the Olympia Port Militarization Resistance put their bodies in front of trucks in order to halt the traffic of military equipment between the United States and Iraq.

On Nov. 7, approximately 100 antiwar demonstrators began a blockade at the Port of Olympia, Wash., to prevent the return of U.S. military hardware and Stryker vehicles used in Iraq. The shipment, support equipment for the U.S. Army 3rd Brigade, 2nd Infantry Division, was set to be transported from the port back to Fort Lewis. After a three-day standoff, on Sat. Nov. 10, police officers in riot gear pepper-sprayed and hit demonstrators with batons before firing rubber bullets in the crowd, arresting 13 people near the port entrance. In defiance, approximately 10 protesters locked arms in PVC pipes and sat down in the street leading to the interstate highway, partially blocking military shipments. Eventually, police officers sawed through the pipes and dragged the activists to a patrol vehicle.