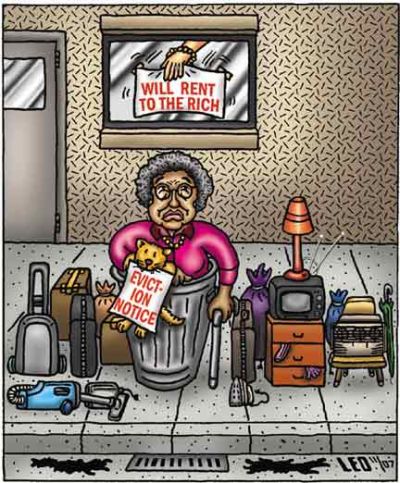 By Steven Wishnia
If the city government devoted as much energy to enforcing the laws against rent-gouging as it does to arresting 40,000 pot-smokers a year, New Yorkers would have a much easier time finding housing they can afford.

The majority of rents charged for vacant apartments are illegally high, according to many housing activists. Landlords, who are entitled to add 1/40th of the cost of renovations to the rent, can game the system by inflating the cost of the work they did. Or they simply charge whatever they can get, figuring that most tenants don’t know they can contest illegal overcharges or don’t want to spend years dealing with the state housing agency’s bureaucracy. If the rent is $2,000 a month or more when the tenants move in, the apartment is deregulated, which means the tenants have so few rights that they’d probably be evicted before their complaint is resolved.

The problem is that the city government can’t enforce the law against illegal rent overcharges. Under the Urstadt law, a state law enacted in 1971 as part of then-Gov. Nelson Rockefeller’s short-lived and disastrous elimination of rent controls on vacant apartments, the city can’t pass any rent regulations stronger than the state’s. Thus, when the state dramatically weakened rent stabilization in 1997, easing evictions and allowing 20 percent increases on vacant apartments, and former Governor George Pataki had the state housing agency virtually stop enforcing the law against rent-gouging, the city government was powerless.

The Urstadt law will not be repealed as long as upstate and suburban Republicans — who take tons of money from city landlords, are generally ideologically sympathetic to the rich, and have few or no rent-regulated tenants in their districts —control the state Senate. But the Democrats may not be much help either. Gov. Eliot Spitzer has made some moves to improve the state housing agency’s policies, but has opposed repealing the Urstadt law.

Combined with the city’s overheated real-estate market, the weakening of the rent laws has created massive opportunities for speculators. Major investors have moved in, such as Extell and Apollo Realty. The $5.4 billion sale of Stuyvesant Town/Peter Cooper Village last year got the most publicity, but in April seven former Mitchell-Lama middle-income developments in Harlem, East Harlem and Roosevelt Island, sold for $940 million.

Spending that much means that the only profitable business model requires ousting the current tenants — by legal or illegal means. The Pinnacle Group, now facing federal racketeering charges, bought up 25,000 apartments and tried to evict 5,000 tenants on dubious grounds, while Laurence Gluck’s Stellar Management specializes in taking Mitchell-Lama buildings out of the program. Smaller operators prowl the fringes of gentrification, harassing working-class, Black, and Latino tenants out.

A legislative agenda for making New York City housing genuinely affordable would include repealing the Urstadt law, vigorously enforcing the laws against rent-gouging, eliminating the decontrol of apartments that rent for $2,000 or more, and freezing or rolling back rents. It would also require building massive amounts of new housing that’s genuinely affordable. Though most people would define “affordable” as something related to how much people actually make, the Bloomberg administration has redefined it as merely less than market rate — and the formulas used for determining “middle income” and “low income” are based on the median income for the metropolitan area, about $70,000 a year, instead of the city median of about $41,500. Thus, an apartment that rents for $2,100 a month can be classified “middle-income.”

So far this year, the tenant movement has gotten the city to begin cracking down on landlords who illegally convert singleroom residential hotels to tourist hotels, and an anti-harassment bill is pending in the City Council. But a further-reaching agenda won’t be accomplished without a much more massive movement. To be effective, demonstrations need to be much bigger than they’ve been, and community groups will have to demand that all or most new housing built be affordable, instead of it containing token amounts such as 30 percent or less. As for direct action, rent strikes are difficult to organize and put tenants at risk of losing their homes — but they’re the most direct way of putting a wooden shoe in the real-estate machine.