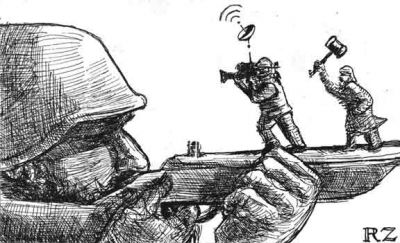 For anyone marinated in the history of Pakistan, the Nov. 3 decision by the military to impose a state of emergency comes as no surprise. Martial law in this country has become an antibiotic: in order to obtain the same results one has to keep doubling the doses. This was a coup within a coup.

General Pervez Musharraf ruled the country with a civilian façade, but his power base was limited to the army. And it was the army chief of staff who declared the emergency, suspended the 1973 constitution, took all non-government TV channels off the air, jammed the mobile phone networks, surrounded the supreme court with paramilitary units, dismissed the chief justice, arrested the president of the bar association and inaugurated yet another shabby period in the country’s history.

Why? They feared that a pending supreme court judgment might make it impossible for Musharraf to contest the elections.

The decision to suspend the constitution was made a few weeks ago. According to good sources, contrary to what her official spokesman has been saying (“she was shocked”), Benazir Bhutto was informed and chose to leave the country before it happened. (Whether her “dramatic return” was also pre-arranged remains to be seen.) Intoxicated by the incense of power, Bhutto might now discover that it remains as elusive as ever. If she ultimately supports the latest turn it will be an act of political suicide. If she decides to dump the general (she accused him last night of breaking his promises), she will be betraying the confidence of the U.S. State Department, which pushed her this way.

The two institutions targeted by the emergency are the judiciary and the broadcasters, many of whose correspondents supply information that politicians never give.

Geo TV continued to air outside the country. Hamid Mir, one of its sharpest journalists, said yesterday that he believed the U.S. Embassy had green-lighted the coup because Washington regarded the chief justice as a nuisance and “a Taliban sympathizer.” The regime has been confronted with a severe crisis of legitimacy that came to a head earlier this year when Musharraf’s decision to suspend the chief justice, Iftikhar Hussain Chaudhry, provoked a six-month-long mass movement that forced a government retreat. Some of Chaudhry’s judgments had challenged the government on key issues such as “disappeared” prisoners, harassment of women and rushed privatizations. It was feared that he might declare a president in military uniform illegal.

The struggle for a separation of powers between the state and the judiciary, which has always been weak, was of critical importance. Pakistan’s judges have usually been acquiescent. Those who resisted military leaders were soon bullied out of it, so the decision of this chief justice to fight back was surprising, but extremely important, and won him enormous respect.

Global media coverage of Pakistan suggests a country of generals, corrupt politicians and bearded lunatics. The struggle to reinstate the chief justice presented a different snapshot of the country.

The supreme court’s declaration that the new dispensation was “illegal and unconstitutional” was heroic, and, by contrast, the hurriedly sworn-in new chief justice will be seen for what he is: a stooge of the men in uniform. If the constitution remains suspended for more than three months, Musharraf may be pushed aside by the army and a new strongman installed. Or it could be that the aim was limited to cleansing the supreme court and controlling the media. In which case a rigged January election becomes a certainty.

Whatever the case, Pakistan’s long journey to the end of the night continues.
Tariq Ali is a novelist, historian, political campaigner and an editor of New Left Review. This article originally appeared in The Independent (UK). See tariqali.org.