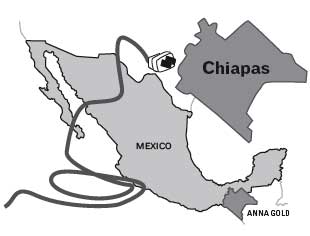 Government officials use a variety of tactics to move rural people off the land: tricking them into signing contracts they can’t read, bribing them with government programs that are meant to divide communally- owned property, forcing small farmers to compete against heavily subsidized exports from U.S. agribusiness or making the land uninhabitable by polluting it with other large, industrial projects. Jacking up the electric bills of people surviving on a few dollars per day further adds to the hardships that have forced millions of rural Mexicans off the land over the past 15 years.

The government’s push to dismantle Mexico’s traditionally agrarian society is rooted in the desire to privatize land and resources and to provide a larger labor pool for the country’s sweatshop factories. In southern Mexico, the government is pursuing Plan Puebla Panama (PPP), a megaproject that would include a superhighway running from Central America through Chiapas and north to the United States and overland railways across the narrow Isthmus of Tehuantepec that separates the Pacific Ocean and the Caribbean. Dams, factories, mining operations, single-crop agricultural plantations and other enterprises mostly run by transnational corporations would proliferate along these transportation corridors.

While the PPP’s proponents assert that its main objective is to improve the quality of life for area inhabitants, the plan itself was developed without any prior consultation with local communities. Since the blueprint for PPP was first unveiled in 2001, hundreds of organizations and communities in Chiapas and other southern Mexican states have formed campaigns of resistance to pressure the project’s supporters to engage in more sustainable forms of development.