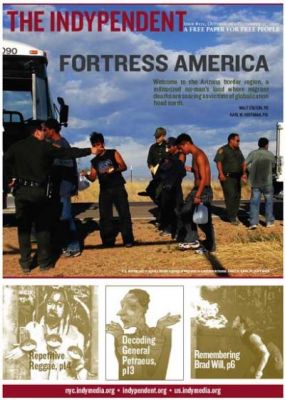 The electric bill comes every other month, but there are still gougers and [they] should be confronted. The electric company in Mexico has it the way they want. People have gotten remedy by blocking roads, etc. The only way to get through to these commercial interests is to interrupt the flow of trade. —Bela
LET MEN BE MALE

Response to “Getting Off Misses the Mark,” Oct. 26

Robert Jensen is rejecting socially constructed “masculinity” rather than his biological sex. The two are not inevitably connected. If we resort to the biological essentialism that radical feminists are usually (and usually wrongly) accused of and say that socially constructed male behavior is an inevitable consequence of possessing a penis, we aren’t going to get anywhere.  It needs to be recognized for what it is, socially constructed, and we need to deconstruct the economic and social reasons for the present The Times (London) state of “masculinity” and the means by which it is perpetuated. This isn’t “forcing men to become genderless;” it’s allowing men to be male without being “masculine.” —Polly Styrene
ACTING LOCALLY

I really appreciate this article and its honesty. In my experience, these large demonstrations have been most valuable for the simple experience that I have at them, and they have rarely given me a sense that as a “movement” this “action” was going to change the world directly. It doesn’t surprise me that people go to D.C. to protest the war; I almost felt like going myself. It also doesn’t surprise me that once there, people ask, “Just what are we doing here?” Our society doesn’t change in response to marches; it’s a reality that is difficult to accept sometimes — especially during a march that one may have energy invested in and expectations of.

But, as this writer exhibits, PEOPLE change in marches. My guess is that for every one of you in D.C. that day, there were a thousand of us here in our towns, going about our work to bridle capitalism and end war. Very few demonstrations actually represent the essence of the movement they purport to give voice to. Many folk gave up on the mass demo thing and are in their little towns, doing the little changes that will, with time, bring us back together again on a regional/national/global scale, and the “movement” will actuall move. Cheers on the honest observations, and keep on! —Pilar

Every day that I drive on the road from Arivaca to Tucson [in Arizona], I am surrounded by U.S. Border Patrol vehicles.

There is always at least one vehicle, and often several, that will follow me, checking my license plate or looking for signs of illegal activity. They follow me closely, then fall back and then another will come along and repeat it. It feels oppressive, but what is the alternative? Is the alternative worse? Is it worth the oppression I feel?  Once again, there are so many variables that affect this situation.—Chris
NO TAXES FOR WAR
Response to “Why I’m a War Tax Resister,” Oct. 26

I’m thrilled to read about this. I’ve been resisting taxes as well, but in a different way. I just keep my wages in the lowest income bracket, and this way I only owe Social Security and not any federal income taxes. Not everyone can do this, but if you think outside of the box, don’t have too many pressing responsibilities and don’t mind stepping outside your comfort zone, it’s possible. For those who may get money taken out of their bank accounts, I wonder if it is possible to “give” that account to a trusted friend or family member, so that the account isn’t in your name and technically isn’t your money, although there is an agreement between you and your friend that it is your money, and therefore you still have access to it.—Fellow Resister

Submit comments to the stories you read online at indypendent.org.