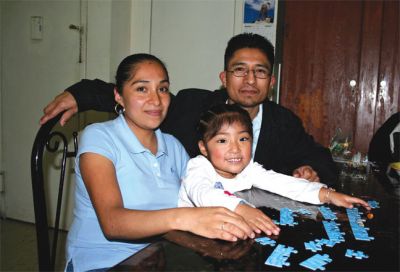 When Ricardo Ramón and Natalia Evangelista immigrated to th United States from Santa Inez, a small, arid farming town in the southern Mexican state of Puebla, they didn’t imagine that they would be fighting displacement again. “We have the same problems we left in Mexico,” said Ramon. “There, they fight for a place to live. Here, we do the same.”Ramón, 25, and Evangelista, 23, are just two of about 380 tenants, organized with the Movement for Justice in El Barrio (MJB), who are fighting off efforts by their new landlord to evict tenants from 47 rent-stabilized and rent-controlled buildings in East Harlem, also known as El Barrio.Since the 47 buildings were bought by Dawnay, Day Group, a privately owned British bank that manages $10 billion in worldwide assets and has real-estate holdings in Europe, India and Australia, tenants have faced widespread harassment and have been falsely charged for services that they never received.

In response, MJB, a Zapatista-inspired organizing model (see sidebar) that has taken root in East Harlem over the last five years, has begun a battle to save one of the last bastions of affordable housing in Manhattan. It’s trying to stop “landlords, the government, and their culture of money,” from displacing people of color and low-income residents under the guise of “development.”

“Their dream is that we leave the building and go away,” said Ramón, who earns $1,800 a month working as a cook, out of which he pays $874 in rent and helps support Evangelista and their two small children. If Dawnay, Day gets the rent increases it seeks, their family and most of the other tenants will be forced out.

Ramón says they love living in El Barrio and “would like to stay here for many years. Our dream is that our children remain here, go to school, graduate and enter a profession.” “Their goal is to make more money each day and that the poor stay poor,” said Evangelista.

One of numerous foreign investors who have been recently attracted to the New York City real-estate market, Dawnay, Day spent close to $250 million in March on buildings north and east of Central Park from East 100th to East 120th streets, containing 1,137 apartments and 55 commercial spaces.East Harlem, called El Barrio by many of its 100,000 residents, is a historically Puerto Rican neighborhood that has recently experienced a large influx of Mexican, Chinese and Arab immigrants. Nearly 40 percent of its residents live below the poverty line. The median household income in 2005 was only $23,000 per year, less than half of the $50,000 figure for all of Manhattan. The median rent was $900 a month — 47 percent of the median income. Dawnay, Day’s objectives were clear: Push out the current rent-regulated tenants, renovate the buildings and raise rents. “East Harlem is the last area of the whole of Manhattan being gentrified,” Phil Blakely, Dawnay, Day’s director, speculated in The Times (London).

He likened purchasing property in East Harlem to buying real estate in Brixton, a London neighborhood — once the heart of the city’s Afro-Caribbean immigrant culture — whose recent gentrification has led to sharp rent increases. “A typical two-bedroom flat taking $150 per month in rent can see the rents rise 3 percent to 4 percent each year without doing anything,” Blakely told The Times (London). “As soon as you take vacant possession, the rents will typically rise 17 percent when re-let without doing anything. But with renovation, a flat could well take $1,700 a month once re-let on the open market.” He estimated that once the East Harlem apartments were renovated and rented at market rates, the value of the properties would increase from the purchase price of $280 per square foot to more than $1,000 per square foot.

To do this, Dawnay, Day can take advantage of the loopholes the state has drilled into its rent regulations over the last 15 years. In New York City, about 1 million apartments, in buildings containing six or more units which were built before 1974, are rent-stabilized, with maximum annual rent increases set by the city Rent Guidelines Board. (About 43,000 apartments, mainly occupied by elderly people who have lived there since 1971, are protected by the older rent-control system, but are usually subject to 7.5 percent annual increases.) But for vacant apartments, landlords are automatically allowed to hike the price by 20 percent. If they renovate, they can add 1/40 of the cost to the rent.

Many landlords routinely flout even these limits. If they can get the rent to $2,000 or more, the apartment is deregulated, which means that the owners can charge whatever they can get, and the tenants have no right to renew their lease when it expires.

Using tactics that have become increasingly common in the last 10 years, Dawnay, Day has been harassing its tenants and charging them for repairs that never took place, in an effort to push the rent-regulated residents out.

Zoila Jara, a single mother of two who has lived on East 106th Street for 13 years, says the company falsely charged her for $1,495. “Dawnay Day claims that some of this is for a washer they say they gave me. The fact is I do not have and never had a washer,” she said. “On top of this, for every month that goes by that I refuse to pay, they add false late fees.” The company has also refused to make much-needed emergency repairs, according to an August article published by the Daily News. Tenant Cristina Ortega reported two separate incidents in which Dawnay, Day failed to do repairs after pieces of her ceiling fell, injuring her two teenage daughters. “I notified HPD,” she told the News. “They have done nothing.” Residents been subject to accusations of overcrowding apartments, asked to pay imaginary legal fees Dawnay, Day has claimed are owed to the former landlord and been offered money to leave.

“They know that we are people with little resources and they take advantage of us. They wouldn’t do this to people who have lots of money. They just want to kick us out so that they can fix these apartments up a little, bring in new richer people, and charge higher rents,” says Josefina Salazar, a Dawnay, Day tenant and MJB member.

Tenants say that Stephen Kessner, the previous landlord of the 47 buildings, used similar tactics. But instead, they evicted him from East Harlem. Fed up with the dilapidated conditions of their apartments, Ramón, Evangelista and other tenants organized and brought Kessner to Housing Court.“When one person goes to Housing Court alone it doesn’t work. Having many people in court together is what carried the day,” said Evangelista. “When a judge sees a group of tenants together fighting, he is more likely to respond than when he sees you alone,” added Ramón. MJB’s campaign against Kessner garnered much press attention — the Village Voice labeled him one of “NYC’s 10 Worst Landlords” in July 2006 — and eventually forced him to put his East Harlem properties on the market. Dawnay, Day bought them in March.

On Oct. 17, along with Harlem Legal Services and the Neighborhood Economic Development Advocacy Project, MJB filed a consumer-protection lawsuit against Dawnay, Day. It requests an injunction to prevent the company from “engaging in deceptive practices by charging all kinds of fees and charges against their tenants which don’t really exist and have no basis in the law,” said lawyer Ed Josephson.

“We think [they’re] part of a scheme to harass the tenants to get them to move out so they can raise the rents on the vacant apartments.” Juan Haro, an organizer and co-founder of MJB, accuses the city Department of Housing Preservation and Development of selective inaction. “HPD says their stated goal is to ensure that tenants are protected, since tenants do have legal rights, but the truth of the matter is when tenants in East Harlem call 311, HPD turns a blind eye, HPD doesn’t respond as they would if these tenants were white, middle-class, upper-class residents such as those that live in midtown Manhattan.” He says that they are fighting not just greedy landlords, but the larger capitalist system and its globalized tentacles — “our objectification by these multinational companies, by these landlords, by the city, by HPD in its attempt once again to displace us so that we are forced to leave East Harlem and live elsewhere.” “They want to remove from the street the street vendors who earn an honorable and dignified living, the families that have their small restaurants, small clothing stores, and the small bodegas on the corners in our neighborhood,” MJB said in a statement.

Just as Dawnay, Day crosses borders in search of capital gains, MJB will soon cross the Atlantic to meet with anti-gentrification groups in London to challenge the company at its global headquarters.

They will also be organizing with groups nationwide by conducting a workshop “Organizing Across Borders for Humanity and Against Neoliberalism” at an immigrant rights conference in Texas and a National Organizers Gathering in Maryland. With this multi-pronged approach, MJB members are confident that they will kick Dawnay, Day out of El Barrio. “We are not going to leave. We’re gonna fight to the end for our children,” says MJB member Paula Serrano.
John Tarleton contributed to this report.