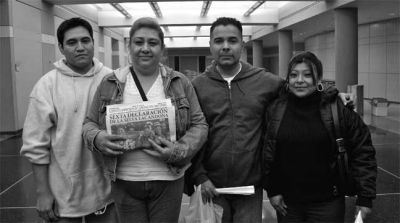 By Indypendent Staff
Movement for Justice in El Barrio (MJB) began in 2004 with informal meetings in the lobbies of five apartment buildings where the group’s 20 original members lived. It has grown steadily over the past three years and now has almost 400 members sprinkled across 26 buildings in East Harlem. Inspired by the Zapatistas, a grassroots rebel group in southern Mexico, MJB engages in a consensual politics of listening and dialogue where leaders are expected to do as the membership tells them to. “As an organization that works for the community, it has to do what the community says,” said Oscar Dominguez, who has been a member since

On Nov. 21, MJB brought together at least 15 different anti-gentrification groups from throughout the city in an encuentro (or “gathering”) that provided a chance to listen, reflect upon and celebrate one another’s work. Observers from groups based in Rhode Island, Connecticut, New Jersey and Pennsylvania also attended.

The result was a multi-lingual, multi-media evening of sharing hope and resistance in the struggle against gentrification. Representatives of city community organizing groups — including CAAAV: Organizing Asian Communities, FIERCE, and Housing Here and Now — described their specific campaigns, general struggles and dreams for the future.

MJB has long been part of the local-global justice movement through its alliance with the Zapatistas, Dominguez said, although they are just beginning to expand their anti-gentrification battle internationally. The “enemy behind gentrification is neoliberalism,” Dominguez said. “It makes victims out of all of us who are different… And what’s happening to us here is happening all over the world to many people.”

The encuentro was not an entirely somber affair. Activists from Make the Road New York put on a series of funny skits, rousing songs and chants which brought the crowd to its feet. The program also featured film footage from CAAAV’s Chinatown campaign, from MJB’s “mega-march” this August, and from the Zapatistas’ reclamation of their land from a Mexican army base. The day ended with a procession of MJB members’ children lining up to smash a piñata symbolizing gentrification and neoliberalism.
Groups Attending the NYC Encuentro
Movement for Justice in El Barrio/
Movimiento por Justicia del Barrio
movementforjusticeinelbarrio@yahoo.com
212-561-0555

The community takes a stand : Oscar Dominguez, Ana Laura Merino, Juan Haro and Georgina Quiroz (left to right) are just a few of the members of Movement for Justice in El Barrio battling gentrification in East Harlem. Photo: K. Cyr