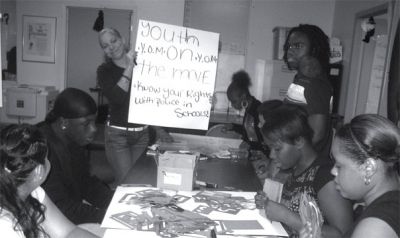 When 13-year-old Chelsea Fraser wrote the word “okay” on her desk at Kyker Heights Intermediate School in April, she was arrested, handcuffed and placed in the back of a police car, according to news reports.

Arrests like this ignite outrage among teenage members of a South Bronx-based youth leadership program called Youth on the Move because of the heavy-handed tactics used by school security agents in New York City’s public schools.

“We talked about how they treat us like prisoners instead of students,” said Davon Montgomery, 16, a junior at Frederick Douglas Academy.

Montgomery and his peers spent their summer videotaping interviews with students about the roughly 4,500 school security agents who patrol the halls and monitor metal detectors as unarmed employees of the New York Police Department. They produced a video called, “Our Schools: Safe or Not?” and have begun using it as a tool to change how agents interact with students.

In the video, Montgomery said agents fail to make his school safer. “Students don’t care if there is a school security agent. They’ll still fight,” he said.

Two Youth on the Move members showed the video in October to tenth-graders at Bronx Guild High School, where students pass each morning through a metal detector.

“We’re here to talk to you guys about a safety campaign,” said Shantell Peterkin, 17, a junior at the school and former Youth on the Move intern.

Peterkin dimmed the lights, pushed play, and chatter from students in the back of the classroom continued until hip hop music began playing behind the opening credits. About halfway through the video, a question appeared on the screen: “Do metal detectors make you feel safe?” Only one of the six interviewees answered yes. One student urged his peers to tell officials they don’t want detectors in their schools.

The video drew positive responses from the class. Students related most strongly to the dayto-day feeling of being treated like criminals. Jesus Cepeda, 15, raised his hand and described a weekly ritual of having his bag of football practice clothes searched each time he returns on Monday after washing them over the weekend.
“They take everything out of it,” Cepeda said. “Then I have to put everything back in.” All agents undergo a comprehensive 14-week training on bullying, conflict resolution and discipline in the classroom, according to a letter from Police Commissioner Raymond Kelly to City Councilman Robert Jackson, chair of the Education Committee.

Police took over responsibility for school safety in 1996 after an investigatory commission created by former Mayor Rudoph Giuliani concluded the New York City Board of Education’s Division of School Safety had failed to maintain security. The thousands of agents, and at least 200 armed police officers assigned to especially dangerous schools, amount to the fifth-largest police force in the country, according to the New York Civil Liberties Union’s (NYCLU) March 2007 report, “Criminalizing the Classroom.’’

The video may be the only public record of how students feel about this force. “The youth are the ones who really know what is happening in the schools,” said Chloe Dugger, field organizer for the NYCLU’s Police Accountability Project. Dugger said that is why the NYCLU supplied Youth on the Move with cameras to make the 4-minute film in July during three workshop sessions with a documentary filmmaker. While students are heavily affected by the agents, Dugger said they have no way to file a complaint if an agent behaves abusively or inappropriately.

Students showed the video to City Councilperson Maria del Carmen Arroyo (D-South Bronx) in August and asked her to support school arrests as a last resort. “Teachers don’t see themselves as vehicles for conflict resolution,” said Arroyo, who called the video a work in progress. “Maybe one strategy that can come out of this conversation is how to make teachers feel more comfortable in that role.”

Youth on the Move has plans to continue showing the “Our Schools: Safe or Not?” video in more classrooms this year.

“The message is there’s a problem with school safety,” said Montgomery, “and we want it to be changed.”