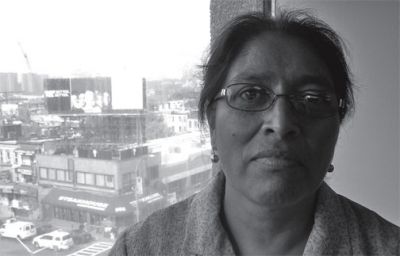 When the governor of the Mexican state of Oaxaca ordered riot police to shut down an encampment of striking teachers on the morning of June 14, 2006, years of frustration with poverty and government corruption exploded into the streets. Thousands of locals joined the teachers, and by the end of the morning, the police had been run off. Ignoring Oaxacan Governor Ulisses Ruiz and his rubber-stamp legislature, the people of Oaxaca took control of the capital city and governed themselves over the next four months.

“It was unedited,” said Raquel Cruz, a primary school teacher and a leader in Oaxaca’s state teachers union who traveled to New York in mid-October as a guest of CUNY’s Professional Staff Congress. “The people organized. The people did everything.”

The rebellion in one of Mexico’s poorest and most predominately indigenous states captured the imaginations of millions, including NYC Indymedia journalist Brad Will, who was killed filming the uprising. On Oct. 28, 2006, the day after Will was killed, federal police swept into the barricaded city and crushed the uprising. Looking back a year later, Cruz shared her thoughts with The Indypendent on the past and the future of a movement that has been suppressed but is, by no means, over.

John Tarleton: What has happened in Oaxaca since the uprising ended in October 2006?

Raquel Cruz: There’s been much discontent. Neither the state, nor federal government, has complied with the agreements they signed dealing with social and educational issues, freedom for political prisoners and clarification of the cases of all those killed in the struggle.

JT: Describe the relationship between the teachers and the Oaxacan people?

RC: There’s a very close relationship between the people and the teachers due to Oaxaca’s characteristics. We are a state of rural communities, and this allows the teacher to remain in the community fulltime. The teachers attend to many aspects — social, educational, cultural — of people’s lives. They also participate closely in the traditional celebrations of the people. This was one of the fundamental elements that strengthened the struggle from May to October 2006. The people supported the teachers and were with them at the barricades.

JT: How has the 2006 rebellion changed the lives of the women of Oaxaca?

RC: Women were the ones at the front. They were the tip of the spear. After a march where they were making noise banging kitchen implements, they seized the Channel 9 television station. When the federal police entered the city in October, women were on the frontlines and they had no fear. It changed the role of women in Oaxaca a lot.

JT: What can we learn here in the United States from the kind of social activism your union engages in?

RC: First of all, recognize that we live in a neoliberal state. In its politics, there is no consideration for what workers should receive. So we have to understand that we are all one and that we have our demands. In Oaxaca, we have persevered through 27 years of struggle. We are fighting for better working conditions and for a better quality of life — for children, for students, for the elderly. For everyone.

JT: How has neoliberal or “free-market” economics affected Oaxaca?

RC: In Oaxaca, it has been imposed and there has been a plundering of natural resources such as water and forests. Transnational corporations arrive and make theirs what belongs to a community. So the people of Oaxaca are resisting. The Plan Puebla Panama (see p. 7) is also important. All of this is a part of neoliberalism with its tentacles entering from all directions.

JT: Why do so many people emigrate from Oaxaca to the United States?

RC: There are no jobs. Tourism is a source of work but the main beneficiaries are the big hotels. Many people come here aspiring to a better life. But, they leave behind their roots and the beautiful thing that they do have — the land. In Oaxaca, there’s much natural wealth. We have to organize ourselves and look for a way that our compatriots can return to their communities and have work.

JT: Talk about Oaxaca’s system of legal impunity. Our colleague Brad Will and dozens of others were killed in Oaxaca last year and yet nothing has happened even though there’s plenty of evidence about who the killers are.

RC: It’s known who is guilty of the repression. It’s the government. An investigation has been done by the International Commission on Human Rights. There’s evidence. There’s documents. Videos show exactly the moment people were killed. Brad filmed the final moments of his life. There are many people in prison for having been in the struggle but there’s no one in jail for having committed murder.

JT: How can we in the United States be of help?

RC : Your conditions are different. Your heads are stuffed with the idea of “work, work, work.” The human being isn’t a machine. The human being has to reclaim values that are human. This will strengthen solidarity. We need to experience the problems of others as our own, so when someone says something is happening somewhere, we don’t feel indifferent.